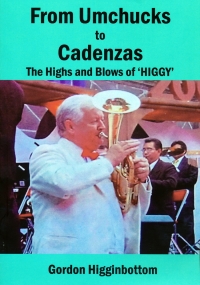 This is a story about Gordon Higginbottom, a legendary figure in the world of brass bands, both here in the UK and around the brass banding world overseas.  This fascinating 260 page book about Gordon's musical life is £9.99 +  £4.75 postage and packaging UK (This may vary for overseas buyers - Europe £7.50 - Australia £11.50) - Published December 2017

I have had visitors from the USA but have managed to read about a third of the book. It’s excellent - Ray Stuttard (Tamworth) - 7 January 2018

The story takes the reader from his childhood introduction to the world of brass bands by his father. The story highlights Gordon's rise from playing in his local brass band to being a teenage member of the famous CWS (Manchester) Band. Playing with this band was to see him later being invited to play and be a member with many of the leading brass bands in the UK.

Gordon developed into one of the most sought after tenor horn soloists in the banding world. It was this and him often being described as a banding personality that saw being invited into the James Shepherd Versatile Brass. With this ensemble he travelled the world and Gordon soon became a household name through the brass band world.

He was often called on to be a guest soloist with many of the leading brass bands throughout the world. His stage performances also included working with the late Roy Castle.

Today, now retired from playing Gordon is still sought after by both individual players and bands for his advice.

His endearing dour sense of humour and his undoubted star quality reputation, and skills as a tenor horn player has brought him a wonderful life and many friends throughout the world.