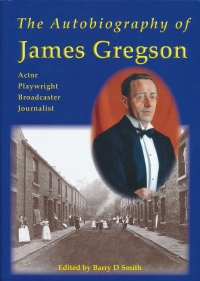 In his autobiography James Gregson tells the story of one man's journey from poverty and depravation in late Victorian and Edwardian England. To a successful career as an actor, playwright, broadcaster and journalist which lasted from the 1920s to the late 1950s.

Gregson's account of broadcasting during the war and the years immediately followingmake the autobiography a rich resource for historians of the media. His involvement in repertory theatre illuminates the early years of the movement and his memories of growing up in Brighouse in the last years of Victoria's reign are a moving and important source for social and local history. .

This has been veery carefully edited by Barry D. Smith, who has had a life long interest in history. Both he and Gregson were brought up in the centre of Brighouse, both attended the same Wesleyan Methodist Mission and finally both were educated in the Rastrick area of Brighouse.

This 252 page book which is packed with brilliant black and white images was originally sold at £20 but is now on sale here at £9.99 + £3.50 p/p. For overseas orders please email for the postage and packaging costs.