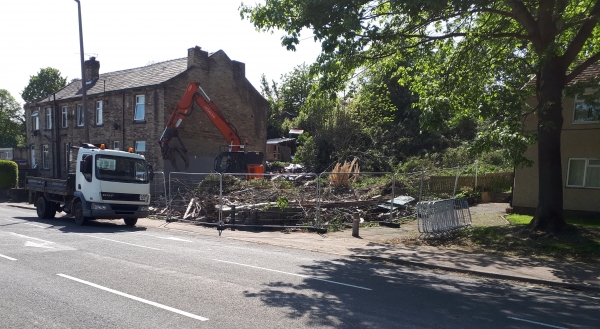 Another piece of local history was demolished this week in Bailiff Bridge. Most people may have never really noticed the old red brick building on Bradford Road which was next to the flats and almost opposite Ceramix the tiling company.

Even local people in the area will be surprised to hear about the history of the building which started as the Brighouse Motor Agency and was selling petrol in cans and supplied and fitted solid tyres. Here was a small business that over a period of years grew into a substantial one.

The Brighouse Motor Agency or ‘The BMA’ as it was known by both its customers and employees began life when vehicular transportation was very much in its infancy. The birth of this company was due to the farsighted business skills of two men that made a thriving business from the humble wheel and tyre in those early days of motorised transportation.

It is almost a century ago that Percy and James Firth nephews of Sir Algernon Firth, of T.F.Firth’s Carpet Manufacturing Company who gave them their early financial backing. Their first premises were two lock-up red bricked garages in Bradford Road next to the flats. Today the second one of the garages has been demolished. 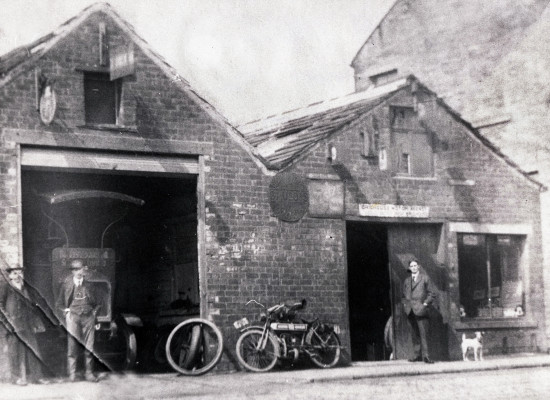 Although when they first opened the business mainly sold petrol in cans and whilst this brought them a slow but steady income it was the earlier development of solid tyres that saw business take off. It was through their knowledge of motor cars, no other similar businesses locally and having the facilities to fit and re-fit solid tyres that you could say they had cornered the market.

Taking advantage of this niche in the trade and buying the necessary equipment the business went from strength to strength. It wasn’t long before the expansion was a possibility. However, it was in commercial vehicles rather than the motor vehicles where they identified and took full advantage of yet another niche in the market – commercial vehicle repairs something other local garages had left alone. Through their continued efforts and reputation, they were rewarded by being given an agency from the Leyland Commercial Vehicles Company, who were expanding throughout the Yorkshire area and saw an ideal location in Bailiffe Bridge along with the reputation of the Firth brothers 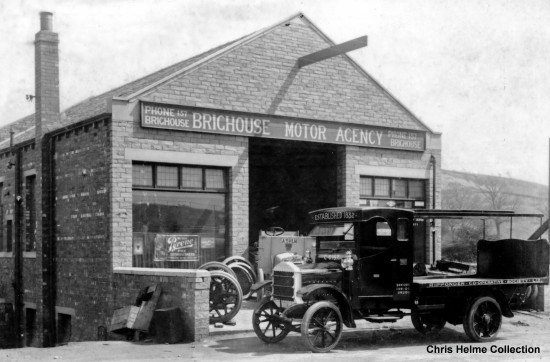 The company is now expanding across the road

By 1928 the business had expanded rapidly with other depots being opened in Hull, Bradford and as far away as Middlesbrough and even the petrol side of the business was expanding as well. The Brighouse Motor Agency was one of the first garages in the area to have underground petrol storage tanks installed. With a never-ending queue to buy petrol at the princely sum of ten and a half pence (less than five pence in modern money) per gallon, they were always kept busy.

During the 1920s the only other form of transport for those unable to afford a motor vehicle would have been the tramcar. It was the brother's astute observation that saw them begin the Calder Bus Service as an alternative. A service that became so successful that by the early1930s the Bradford Corporation had bought the routes from them.

Not long after selling the bus company the two brothers decided to embark on finding larger premises. The unlikely opportunity suddenly presented itself when a significant plot of land became available from the Kirklees Hall Estate, which was almost directly opposite their original red-bricked premises. Following keen negotiating, they bought it and built one of the most impressive garages sites in the whole district. 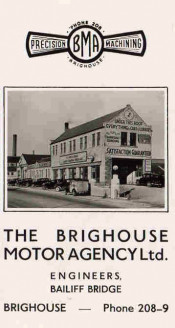 The business went through another boom period following a visit by two representatives from the Royal Ordnance factory at Chilwell in Nottingham and was awarded long term contracts to work on army vehicles. The BMA certainly played its part in helping to rebuild the transport system in Europe right up until the contracts were finally terminated in 1952.

The business had to now begin to diversify or it would go out of business – the call was answered with new business coming from none other than the Rolls Royce Company who required precision engineering work. Very soon the company’s main business of vehicle fleet maintenance was just a memory as they progressively moved on to full-time precision engineering for the Rolls Royce Company and many other household named companies.

It was this change that in 1952 saw the old name of the Brighouse Motor Agency being dropped and renamed ‘Calder Engineering’. In 1971 the company was bought out by Reed International and gradually went into a state of decline along with many other engineering companies. 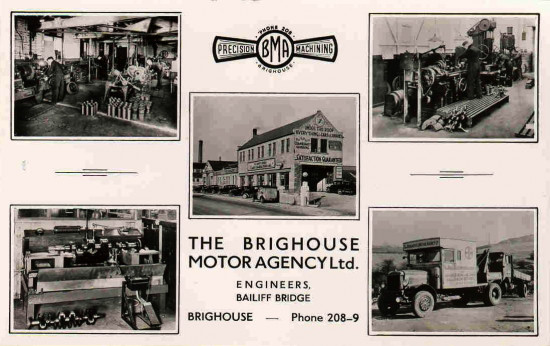 The Brighouse Motor Agency in its Heyday

This company finally close and the site and contents were auctioned off. Today the building has a new lease of life and through diversification, it now employs many people in successful small and medium-sized businesses.

Now the red brick buildings have both been demolished today as the last one is being taken down the plans are to build two houses on the site. Whilst these red bricked buildings have been an important part of the local history of Bailiff Bridge once they has become unuseable and in a serious state of disprepair theri demolition and redevelopment is the best thing.

It has been known for many years that at the rear of the two red bricked buidings was a water well that was often known to cause water problems in the area.