Lightcliffe Memories from the early 1950s 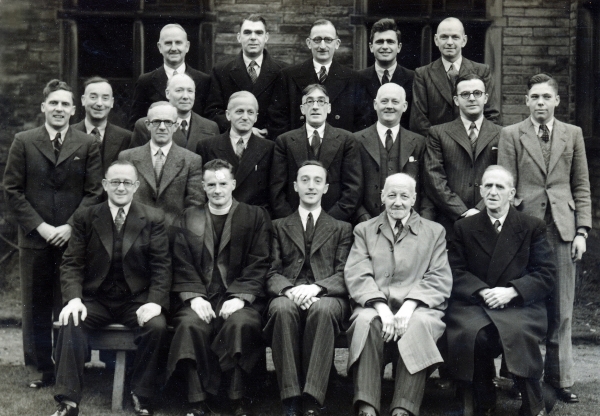 This photograph c:1950 was taken in the grounds of the Lightcliffe Congregational Church. These are members of the church men's group. Are you related to any of these gentlemen?

Back Row: Mr Pearson, William Knowlson, he lived at The Grove and was a Bank Manager, Bert Riding, lived in Wakefield Road opposite the cricket club and had two daughters who were teachers. He work at Vernon Moss's at one time, Douglas Smith and Mr Hewitt.

Middle Row: ?, Norman Wade, George Garside, Mr Haddock, he lived near St Martthew's, ?, Tom Brookes, Mr Heaton, he only had arm and lived near the golf course his son, Philip was a chemist, Mr Barker and Cliff Knowlson also worked in banking.

Front Row: Edwin Whittaker, Rev Philip Dolphin, Mr Hoyle, he worked at Crossley Carpets then went on to become a social worker, Mr Latto, he had very early connections with the Lightcliffe Golf Club and a number of player awards at the club have his name attached to them and Mr Oaks or Oats.

I would be interested to hear from any relatives of these men.