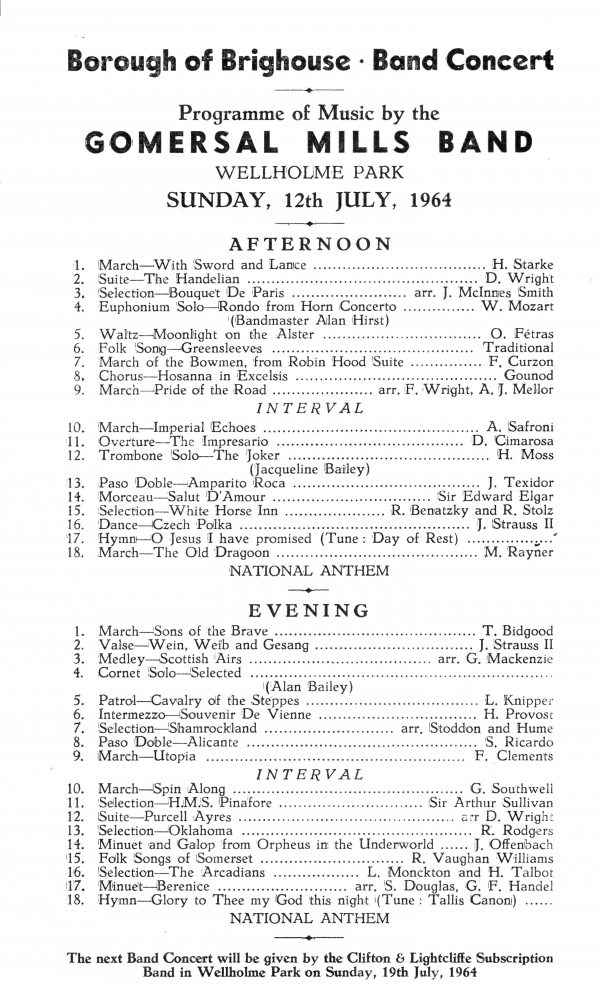 The Gomersal Mills Band of Thomas Burnley's large woolcombers, worsted spinners and dyers, a large company based in Gomersal a small town on the outskirts of Leeds. Whilst the mill complex was in existence for about two centuries the band was formed in 1942. Conductors of the band have included Frank Braithwaite, R. Nevin, Norman Hudson, L.Scott, J.Hewitt, J. Walker, Harold Kemp and Luther Dyson. He had a notable contest success with the band in 1945 at the May Belle Vue contest Manchester when the band was placed 2nd in the class B section.

The band's most notable contest win was in 1949 when it was awarded 1st prize at the Daily Herald fourth section finals at Belle Vue and a 1st prize in the 3rd section at the Filey Summer Festival the same year. At the concert following this festival the youngest player 8 year old Peter Teal played a cornet duet with the legendary cornet player Willie Lang  of Black Dyke Mills Band . 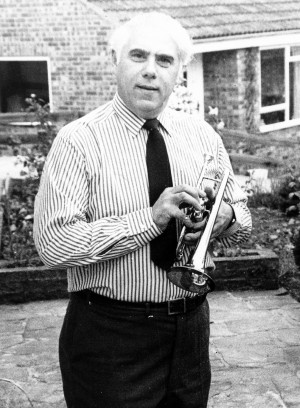 Peter has gone on to have a life time in brass bands, notably with the Brighouse and Rastrick Band.

Whilst the band was up and down from the fourth and third sections it did have a purple patch during the 1970s when it was promoted to the second section. However, by 1979 it was in the fourth section. The band's last appearence at a contest appears from available research sources to have been at the 1979 Yorkshire area National Finals, St. George's Hall Bradford. A poor result followed and it would appear that the band folded the following year.

Returning to the concert programme for the Wellholme Park engagment. Wellholme Park through the former Brighouse Borough Council and later Calderdale Council hosted brass band concerts throughout the summer months.

The concert would fall into two halves, with the first part starting at 3pm and finishing at 4.45pm. The evening part of the concert would start at 7pm and would draw to a close at about 8.30pm. This meant the programme for this concert would have approximately 35 to 40 different pieces - no duplication in those days. The audience were in attendance for the long haul by attending the concert from start to finish.

In the event of rain it was always the same, no sneaking off home, the evening concert performance would be held at the Brighouse and Rastrick bandroom the Oddfellows Hall in the town centre.

If it did rain before the concert in the afternoon you still had to turn up otherwise the band would not be paid for the engagment. The older members of the band used to tell the younger members they had to turn up because the council always had someone visit the park just to see you had turned up. They also told young members that the council official would be in a disguise, so you would not know if the council man had checked up on you or not .

These were the halcyon days of park engagments. Those of us who had played at parks jobs regularly knew the standard kit you had to bring - six of your mothers clothes pegs, forget those and you were in for a rough day. We always had to bring the chairs from the park potting shed, it was then, just then, when you found out if the green paint was still wet or sticky. Better to find out sooner than later, otherwise the green stripes would be across the back of your jacket or on days when the band secretary gave permission for shirt sleeve order, when the same green stripes would be across the back of your nice clean shirt.

I am sure many of you will have memories of your days playing in the parks. Please send me just some of them to share with other readers - thank you.