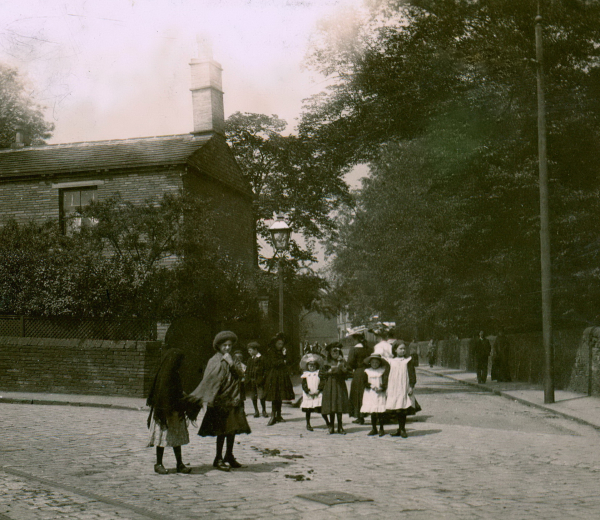 My featured photograph is showing the junction of Bonegate Road and Old Lane in Brighouse, but what was the date when these children were caught on camera?

Judging just what year an old photograph was taken can sometimes be difficult to work out, particularly when the photograph which might be a postcard has not been through the postal system. There are no motor cars to work out a date possibly from the registration number, or the time when that model of the motor car was popular. So now you have to look a little harder at the content itself.

Are there any landmarks in the photograph that have since been demolished and their disappearance can be dated?  Even though the trees are not there anymore or the doorway in the wall on the right has now gone neither help to date it. Now, we have to really look closely at the content and carry out a bit of research into just what we can see.

Two features stand out that will help us closer to the date. Firstly, the style of clothes the children are wearing. This I feel gives the clue that it is dated between 1902 and 1910, a period known as the Edwardian era. So that has narrowed it down to within eight years.

Now, look at the road as it swings around this corner in Bonegate Road, here we can see tramcar tracks which are part of the tram route from Halifax to Brighouse. This forms part of what was the extension to the route from Stump Cross through to Brighouse. In 1902 the decision was taken to extend the existing route from Stump Cross through to Hipperholme, down through Hove Edge and on to Upper Green Lane. Then passing the cemetery in Lightcliffe Road, down Bonegate Road and finally on to the new terminus outside the George Hotel. This extended route was officially opened February 26, 1904.

With this information, our photograph is dated sometime after 1904 and no older than 1910 and I have taken the middle option and would say it was taken c1907.

Now let us look at the origins of the two street names Bonegate Road and Old Lane, names that still exist today. There is, of course, the house called Bonegate Hall, where until a few years ago two whale bones were standing as an archway in the grounds and discovered by builders hidden away and almost lost in the shrubbery.

Why should there have been whale bones in this area of Brighouse?

Muktuk is the Eskimo word for whale blubber which forms an important part of their traditional diet because of its high energy value. Some readers may recall that whale meat was available to buy during the Second World War years.

The purpose of whaling was largely to collect blubber. This was rendered into oil in try-pots, or later, in vats on factory ships. The oil could be then used in the manufacture of soap, leather, and cosmetics. Whale oil was used in candles as wax, and in oil lamps as fuel.

The keyword for Brighouse here is soap because there used to be a soap manufacturing works where the Venue 73 (formally The Ritz) car park is now, and Bonegate Road is named after the Hall and the old soap works.

Old Lane was the main road through to Brighouse before the current Bradford Road which runs parallel to Old Lane was constructed and opened as the new turnpike road in the 1820s. This left the original road to be called and reduced in its importance, to being known as Old Lane.

This featured image can tell us much more about just one small part of our community than being just a nice old postcard.