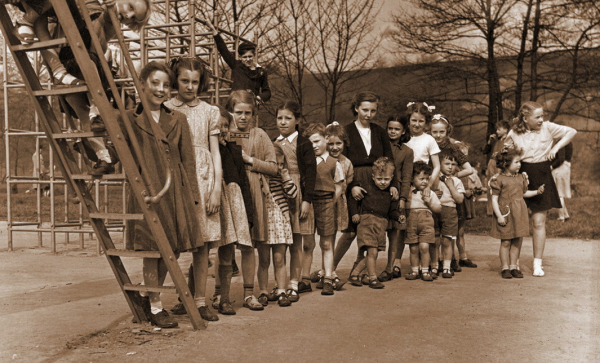 Wellholme Park Children’s Centre has been serving Brighouse families since its opening day on Saturday 12, September 1942. It was opened as the Wellholme Day Nursery by the Chairman of the Brighouse Health Committee, Alderman Ben Asquith, in company with the Mayor Alderman Herbert Womersley JP.

But why was it built and why was it felt there was a need for such a place? To find that answer we have to go back to the outbreak of the war in 1939. Once again, the young men of Brighouse and the surrounding communities were asked to take up arms. As the number joining-up increased, women felt they too must help the war effort. Gradually more and more women joined the ranks of the employed in all kinds of jobs. This was as diverse as joining the Land Army as many Brighouse young ladies did. Or as a lady I met a few years ago, who was all of 5’3” (160.02 centimetres) in height and weighing no more than eight stone (50.80 Kg), told me that she was one of the ladies who went on to be drivers and, in her case, driving a five-ton Bedford wagon throughout most of the war.

However, for most women the greatest thing to prevent them from doing this was not the inability at finding a job but who would look after the children whilst they were working a full day.

The answer came from the Borough Council – in 1942, when the council announced that three wartime children’s nurseries would be built. One would be at Ogden Lane at Rastrick, another would be in the grounds of Holme House at Lightcliffe and a third would be in Wellholme Park.

In June 1942, the Maternity and Child Welfare Committee appointed Miss J. Smethurst from Leigh as the first Matron at Wellholme Nursery with Miss M. E. Sheffield of Brighouse as her deputy. Probationer nurses included: Miss Eileen Spencer, Smith House Avenue (Eileen missed the initial interview because she had chickenpox but once she was well again, she successfully passed the interview and was appointed); Miss J. Greenwood, Bank Street and Miss M. Fawcett, Industrial Street and the cook was Mrs M. Drake from Archbell Avenue. Maids, who were appointed included Mrs C. Wilby, Bradford Road and Mrs E. Settle, Manley Street.

This photograph was taken in 1952 shows some of the children who attended the nursery at that time. I wonder how many of these children are still around, can you remember your days at Wellholme Day Nursery?

Let us hope that this centre where ‘Quality Counts’, continues to give our local children the best start in life as it has done for almost 80 years.