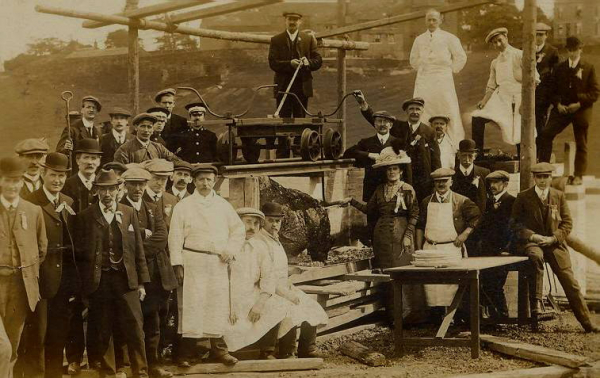 Today's featured photograph dates back to June 22, 1911, and the coronation celebrations for the new King George V and Queen Mary. This is the preparation spit for the ox roasting at the Rastrick cricket ground. Having seen a photograph of the huge ox before its roasting it must have taken hours to cook and there would have been enough meat to feed the community for days in meat sandwiches.

The Brighouse Echo reported in 1911 from an initially un-named source that the King had married in Malta in 1890 to the daughter of an Admiral Seymour. With the marriage to Mary of Teck in 1893 being bigamous.

It is not clear which daughter of the Admiral the King is supposed to have married but is said to have occurred when he was a young naval officer. What at the time was a long-standing rumour was eventually published by journalist Edward Mylius in 1911.

The accusations got worse when it was even suggested the King had five children by the 1890 marriage.

Mylius alleged in a Paris-based Republican paper The Liberator in 1910 that George V, who had married Princess Mary of Teck in 1893, had previously married Mary, the daughter of Admiral Sir Michael Culme-Seymour while serving in Malta as a young man. This would have been scandalous and also illegal contravening the Royal Marriages Act 1772.

Royalty avoid suing over lies told about them but on this occasion the King decided he had no choice. The rumours accused him of bigamy, which also brought into question the legal status of the Queen and the legitimacy of all their children.

The King, on the advice of Home Secretary Winston Churchill, issued proceedings against Mylius for criminal libel and said he was prepared to give evidence to disprove the allegations. Sir Rufus Isaacs, the Attorney-General, advised the King that it would be unconstitutional for him to give evidence in his own court.

Mylius was arrested for criminal libel and tried before the Lord Chief Justice of England and a jury. Sir Richard David Muir, prosecuting, showed that the claims about the King were totally untrue. Mylius received a 12-month prison sentence

It was the mayor Alderman Robert Thornton JP who decided that Brighouse should have a coronation celebration. Even though a contribution from the rates would help to pay for it. I feel sure that a good time would have been had by all those who attended the many community events that were organised including the ox roasting at Rastrick.