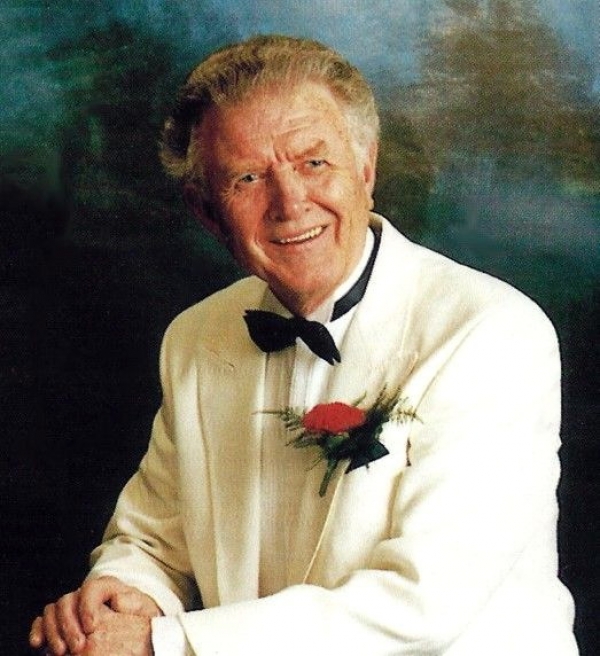 Major Peter Parkes had a long and distinguished musical career serving  in the Duke of Cornwall's Light Infantry, the Royal Tank Regiment, the Royal Engineers, the Grenadier Guards and the Royal Army Medical Corps. He then followed in the footsteps of many other famous military musicians by taking a leap into the unknown and moving into the world of brass bands.

But let us go back to the beginning and ask, 'When did it all begin?'

Peter Parkes was born in Northampton in 1928. This was the same year that the Black Dyke Mills Band, the band he was to conduct for 14 years and have the most success with, won the coveted first prize at the Crystal Palace brass band championships playing Gustav Holst's Moorside Suite.

His parents Kate and Leonard Parkes owned and successfully ran a fishmonger's stall on Northampton market, and his uncle was a butcher. In those days music was not something that ran through the family.

He attended the local St Mary's RC School where he passed his 11plus and went on to be taught at his local intermediate school until he was 14. On leaving he was apprenticed at the Northampton Electric Light Company.

Music entered his life when he was 11 and his teacher put on an old 78rpm record of the Finnish composer Edvard Järnefelt's orchestral composition Praeludium. If ever the young Peter was to experience a life changing moment then this was it.

Immediately he decided that he wanted to play an Oboe, but was told there would be little chance of that. Initially disappointed he was not going to give up. When he found an old violin was for sale he worked both on his family's fish stall and in his uncle's butchers shop to earn enough money to buy it. He very quickly raised the money and the violin was his. This was the beginning of what was to be a lifetime in music.

Now the proud owner of his own musical instrument he needed a teacher. Having found one he called at his home, cheekily knocked on his door and asked him for violin lessons. Somewhat surprised by this young boy's visit and forthright determination he agreed. This was not just an opportunity of being taught to play a violin. It was an opening and an awakening to the world of music in all its forms.

The violin teacher became aware that his young student would soon be eligible for his national service. He suggested that it might be a good move to apply to join the army band when the opportunity presented itself. It might also be prudent to learn a wind instrument. Peter agreed and decided on the clarinet and he soon became proficient enough to play in the town band.

In 1945 along with a friend Peter applied to join the Royal Engineers staff band but this was turned down by the director of music. However, he did recommend them to the bandmaster at the Royal Leicestershire Regiment, who did accept them in September 1945.

In 1946 he was sent as a pupil to the Royal Military School of Music at Kneller Hall and in 1951 went back as a student bandmaster. He passed his examinations with flying colours and in 1954 was appointed Warrant Officer  Class 1 (BM) Bandmaster of the 1st Battalion, the Duke of Cornwall's Light Infantry. This was a post he enjoyed until 1959 when he was appointed Warrant Officer Class 1 (BM) Bandmaster at the 1st Battalion, the Somerset and Cornwall Light Infantry for three years. At this time he was the youngest bandmaster with the rank of Warrant Officer Class One.

In May 1962 he was commissioned to Lieutenant (Director of Music) of the Royal Tank Regiment (Alamein Band). His military music career soon gained further recognition in 1964 when he was appointed as Captain Director of Music (D of M) for  the Royal Engineers.

On October 19, 1970, he was appointed as Director of Music of her Majesty's Grenadier Guards, and promotion to Major followed. A post he held until 1977. It was  a very prestigious appointment which saw him undertake many ceremonial duties  including Trooping the Colour, Armistice Day services at the Royal Albert Hall and state banquets. His duties also involved composing marches for the Grenadiers, one in particular he wrote for the Trooping of the Colour was The White Plume.

Having left the Grenadiers in 1977 he was appointed Director of Music of the Royal Army Medical Corps Band until May 7, 1979, when he retired from military service.

In 1975, The Major, as he was always called in brass band circles, was invited to conduct Black Dyke Mills Band (now Black Dyke Band) as a one off at the National Brass Band Championships at the Royal Albert Hall. The test piece was Robert Farnon's Un Vie De Matelot. The band was placed first, three points ahead of its nearest rivals Stanshawe and Brighouse and Rastrick bands.  Following this success he was invited to be the band's professional conductor, a position he was to hold for the next 14 years.

The combination of the Major's musical interpretation and inspired leadership coupled with the band's top draw performances both on the contest platform and the concert stage around the world, made it an almost unbeatable combination.

With prizes at the very highest level - European, British National and British Open Championships.  There are few conductors in the history of the brass band movement that have taken a band to seventeen titles, in such a relatively short time.

If there was one year from the fourteen that could be highlighted then it would have to be 1985. Black Dyke Mills were the band to beat but few could do that. Reviewing through the history of Black Dyke it is difficult to imagine just how successful that year was to be when looking back at the two preceding years when almost half the band was replaced. This included three new basses, half a dozen other players including a new trombone section.

Even after the early success in January winning the BBC Band of the Year competition, no one in the band and certainly not the Major, could imagine what was to unfold over the next few months.

The second title was in February when the band was once again crowned Yorkshire Area Champions. The band's performance of Wilfred Heaton's Contest Music is still the topic of conversation in the bars and tea rooms at today's contest venues. The top C sharp being held for 15 seconds by Philip McCann and then like an eagle diving for its prey he came down to F sharp so perfectly everyone knew who the winners would be.

May 4th saw the band and its conductor in Copenhagen. Could any one stop them at the European championships? The set test was George Lloyd's Royal Parks but the decision to play Volcano as the band's own choice piece took many by surprise - a brave choice. It made no difference the band and the conductor were crowned the 'Kings of Europe'.

Three down two to go. The organisers choice for the British Open was Gilbert Vinter's Salute to Youth, a favourite with both bands and audience alike. Those who were there on that September day at Manchester's Free Trade Hall will almost certainly remember the top C in the final chord. Once again a fabulous performance with the big finish took the band over the line.

With just the one major contest left could the band make a clean sweep of it. The test piece for the October national championship was John McCabe's Cloudcatcher Fells. What a performance, drawn as the penultimate band in the field of 18 contenders. Black Dyke had done it, pushing Desford and IMI Yorkshire Imperial into second and third respectively.

Kevin Crockford recalls his memories of that incredible year: - 1985 will always be a magical memory for me, Black Dyke Mills Band conducted by the truly great Major Peter Parkes, we won everything that year.

We had the belief that we really were unstoppable and so it proved. This confidence was brought about by the man in the middle, his musical excellence, his conducting style and probably most importantly of all, his brilliant man management skills.

The Major knew every single one of us and knew exactly how to motivate each individual to perform to his absolute best.

A rare skill and a vital one to have achieved so much success with so many massive characters.

For example, if the Major wanted me to play something better ( or even just get something right ! ) he would say to me, “I think I’ll put that solo line on to the front row Kevin” … knowing I would fight tooth and nail to avoid that. It always worked, and he knew it. He knew which button to press for everyone, it was rare we gave an under par performance with the Major.

I recall when we first rehearsed Cloudcatcher Fells (the final performance of that Grand Slam year ), nobody liked the piece on the first play through, and I’ll never forget the Major saying at the end, “well, it’s the same rubbish for every band, but don’t worry, it’ll be great”. How right he was and interestingly, how wrong we can all be with our thoughts on the first run through of a new piece, Cloudcatcher is one of my all time favourites now and that is purely down to the Major.

It is so gratifying that so many people still claim that the “Complete Champions “ CD is probably the best of all time. I’m sure the Major would be so proud of that too.

1985 with five contest wins is certainly one for the statisticians. The band and conductor to get three doubles, the first hat-trick European, the Open and National title - 16 titles in 10 years.

When he left Black Dyke in 1989 he was appointed the professional conductor of the Williams Fairey Band. In 1993 he conducted the band to the 'double', winning the British Open and the championship final in London.  He topped that off the following year with another championship winning performance at the European championships in Montreux, Switzerland.

Once he left Fairey's he spent many years working with a number of other household name bands: Grimethorpe Colliery, Desford Colliery, Sellers International, Ever Ready (now Reg Vardy), Sovereign Brass and a number of others including overseas bands as well. Between 1975 and 2010 he conducted bands at 318 contests - 1st 96; 2nd 55; 3rd 35.  His last major victory was in 2008 with Sovereign Brass at the Pontin's Championships with John McCabe's Cloudcatcher Fells.

Major Peter Parkes will never be forgotten by the brass band community. All those players that had the pleasure and honour of playing under him will never forget his special way of getting the best from both the music and the players themselves.

Handel Parker’s hymn tune Deep Harmony was widely regarded as The Major's  signature piece. Whether it was this simple hymn tune or the complexities of a highly technical contest piece he was able to lift the band to a higher plane, 'you always played your best for the Major'. He had those rare management skills in brass banding of being able to get the best from his players all the time.

During his long career he travelled the world as conductor and contest adjudicator, and directed brass and military bands in the recording of more than 100 commercial LP records and CDs. He never retired from his musical career and was working right up until his death.