Alderley Edge Prize Band - do you remember this band? 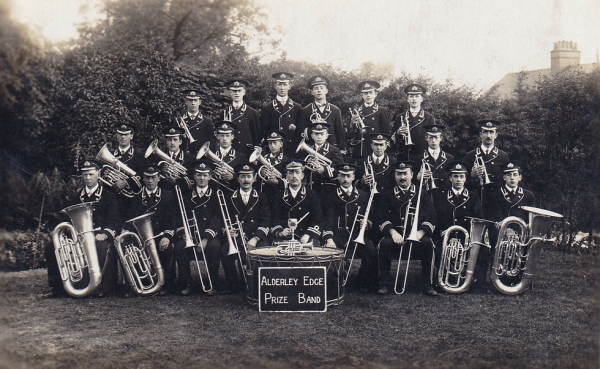 Here is a band that had a degree of success during the 1920s and 30s at local contests. History shows that it did not survive the Second World War.

There is very little information available about this band. It did take part in an own choice contest at Macclesfield on Monday, 15 September 1856 and was placed 6th out of the eight bands taking part.

On Saturday, 11th August 1906,  the band took part in a set test contest, the test piece was John O'Gaunt which was written in the early 1900s and not to be confused with the Gilbert Vinter masterpiece by the same name. However, the band was again not in the prizes. This contest was a local one for the band being held at Alderley Edge.

The first contest where the conductor William Barton is referred to is in 1907. On Saturday, 4th May 1912 the band was conducted by a Tom Eastwood who was a very active conductor from 1908 through to his last contest in 1951. At the 1912 contest at Stalybridge he conducted three bands on the day and was awarded 3rd place with Milnsbridge Band (Huddersfield area). Neither of his other two bands Irwell Old or Alderley Edge were in the prizes.

Alderley Edge band appeared regularly at contests during the1920s through to what appears to be its last in 1939 at Alderley Edge conducted by Walter Eastwood. Whether he was related to Tom Eastwood, without further research I cannot say. It looks as though as with many bands with the outbreak of the Second World War this band did not start again after the war years.

I would be interested to hear from anyone with any further information about the band and possibly any of the players names on the photograph.

The photograph is courtesy of IBEW.com