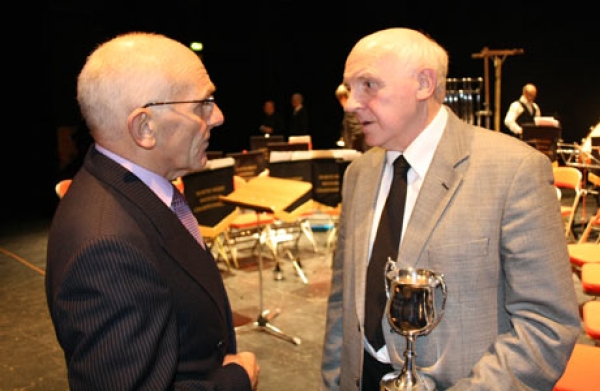 In this photograph taken in 2010 (courtesy of 4barsrest) shows Roy chatting with James Shepherd at the North West Regional Finals.

I have only just heard that the highly respected soprano cornet player, adjudicator and band trainer has sadly passed away.  I will be featuring solos and band performances that featured Roy in Sunday Bandstand next week. A few years ago I wrote a story about Roy's life in brass bands. I have made this story available once agin to remind us all what a talented player Roy was for so many years at the highest level of brass banding. Please read the story which I wrote in conjunction with Roy and the following is that story reprinted and unedited.

Roy began his musical career when he started taking singing lessons and by all accounts as a young lad he had a tuneful singing voice. His early musical influence of course came from his father who sang in a local male voice choir - adding to the music making in the Roe household was his mother who played the piano, not something Roy wished to pursue at the time. His singing talents led him to enter a number of local singing competitions where he was quite successful in winning a number of prizes. He started playing a brass instrument with the Salvation Army at the age of eight, having been taken down to the band rehearsal by a friend and being so impressed with what he saw and heard.

At the age of 13, he moved to his local colliery band in his home village of Dinnington near Sheffield and as his standard of playing progressed he successfully auditioned to join the National Youth Band. His rapid progress was soon noticed by a number of the country’s leading bands and over the next few years enjoyed spells with both Fodens and Fairey’s before he finally joined Imps in 1969.

There are examples throughout the history of brass bands how certain players who have started playing one instrument but end up playing another not necessarily by design but more by chance or – well I just fancied a go on it - and then make a terrific success of the change. Roy fits into that category, by the time he was 14 going on 15 years old for no other reason than – I fancied having a go – he decided to move on to playing the Soprano filling the vacant position. So he became the new Dinnington Colliery Band Soprano player – although his father was initially not too pleased with Roy’s decision with his rapid progress he soon grew to accept it.

Roy can recall that first rehearsal with Imps now even though it is 33 years ago and is made so very welcome by the Musical Director Trevor Walmsley. Whilst he told Roy that he would be a real asset to the band as a player he hoped that his years of experience would also help the younger members of the band.

As with all bands they too had their ups and downs – he remembers that when they were rehearsing Spectrum for the 1969 British Open Trevor had the band practising in different parts of the factory for various effects – sadly it was to no avail based on the final positions when the results were given. In stark contrast 1970 was their year – after lots of hard work – a number of improvements in some departments and a test piece that really suited both the band and conductor – the result, of course, saw them take the title of British Open Champions for the first time.

Another memorable year for Roy and the band was in 1978 at the National Championships. Owing to Trevor being unavailable the band’s associate conductor Denis Carr had the opportunity of making his presence felt. That year it was a particularly difficult piece and for those who cannot remember it was of course ‘Checkmate’ by Sir Arthur Bliss. Denis really worked at the band for that one. That was the same year the band recruited a new trombone – a young 16 years old called Ian Bousfield – the second movement of Checkmate is notoriously difficult but as Roy recalls Ian made it sound easy, such a performance from someone so young was incredible. Of course, the whole band did well and finally pulled off the big one playing off number 9 they beat off Besses o’th Barn with Roy Newsome; Grimethorpe and Stanley Boddington; Fairey Engineering and the Wee Professor Walter Hargreaves; Fodens with Jim Scott and in sixth place St Dennis’s with Eddie Williams. Roy believes this was certainly the contest performance that was so memorable for all sorts of reasons and was a pinnacle of the stature of what was a fine band.

Throughout his musical career, there have been many people whose influence he feels he has benefited from. Just some of these marvellous people include Trevor Walmsley; Denis Carr; Norman Ashcroft – Principal Cornet at Fairey’s; Teddy Gray – Principal Cornet at Foden’s; Charlie Cook – Foden’s Soprano from the late 1930’s and Ted Swindels – Foden’s BBb Bass who was one of the senior members of the band during Roy’s tenure at Foden’s and taught him a lot about banding generally and was someone who Roy considered to have been a fatherly figure back in those very early 1960s.

Throughout his musical career, there have been many musical arrangements written especially for him by Derek Broadbent and Fred Muscroft.

Roy had many successes Imps and the other bands he played with – the highlights included obviously the 3 Nationals, 3 British Open’s which stand at the top and then, of course, their many others as well along with the many memorable Whit–Friday, March contests. Between 1960 and 1991 Imps won 55 firsts; 34 seconds; 20 thirds and 2 fourths which at that time made the band third in the top ten list behind Brighouse & Rastrick and Black Dyke.

Roy left Imps in 1979 to join Brighouse and Rastrick after what was a tremendous ten-year reign on Soprano when he played a solo on every concert programme. Although he now only plays in the comfort and privacy of his own home he is still kept very busy on the adjudicating circuit and with the knowledge that his two sons have followed in his footsteps he just as his parents were proud of him as he stepped out to the stage at Dinnington all those years ago he his equally proud of his two sons achievements.

Roy’s lasting memory that he will take with him from his own playing days will be the common factor felt by many who have been involved in the world of brass bands the music and of course the friendship.