ENDEAVOUR - A WEEKEND WITH THE ISB 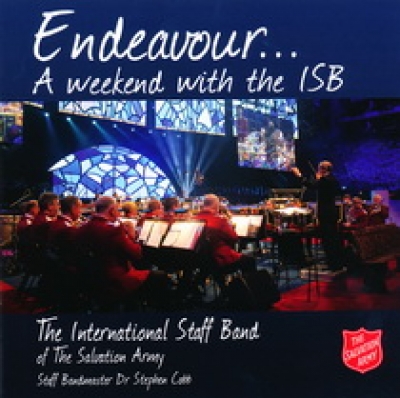 This CD contains music that is representative of the band’s programmes when going on their monthly visits to corps up and down the country. Included are items featured at their Saturday concerts and music of a devotional nature used for their Sunday morning services.

Most of the works on this CD were written during the past two years.

The title track Endeavour by Martin Cordner is a rollicking march, full of energy and in complete contrast to the following piece, Paul Sharman’s All the World is Waiting which is quietly reflective in a  choral style that is elegantly simple.

The band’s performance of What a Wonderful Day is just another example of their versatility as they play in the big band style.  Glory, Hallelujah!’ is a lively selection of tunes, some modern and at least one, ‘The devil and me’ dates back to 1899.

Featured soloists are Richard Woodrow (flugel horn), who performs the jazzy foot tapping Living Waters in fine style. It was written for him by Australian Sam Creamer. While most of us are familiar with the versatility of Derick Kane, who has occupied the solo euphonium chair at ISB for the past 40 years, here we hear him in reflective mood in Howard Evans’ When He Cometh which is upliftingly beautiful in its simplicity.

Geoffrey Nobes’ treatment of the 14th century Quem pastores laudevere in Jesus, good above all other provides a moment of sincerity and reflection as it gently flows along, particularly if one has the words of the hymn in mind.

Bolsover District Council, through its director Carole Compton, commissioned Steven Ponsford to write Cross-Rhythms for their brass band summer school. It has melodic episodes alongside its rhythmic patterns with references to the hymn tunes Rockingham and Llanfair.

Listening to Steven Ponsford’s setting of John Larson’s A Special Moment, one can quietly reflect on their personal relationship with God as the first line of the verse declares ‘This is God’s moment, God’s moment with you’.

Martin Cordner’s arrangement of The Garden portrays the events of Good Friday with contrasting scenes of agony, fear and regret on this, the darkest day in the Christian calendar.

The Peter Graham arrangement of Joy Webb’s Candle of the Lord contains references from other of his brass band works for the Salvation Army.

Composed in 1981 by Ray Steadman-Allen for the centenary of the Royal National Mission to Deep Sea Fishermen, Into the Deep contains a selection of well-known hymns which have references to the perils faced by those who make their living from the sea. As with all R.S-A’s works, this piece displays the high standard of craftsmanship that we have come to expect from him.

The cleverly constructed march, Spirit of the West by Dudley Bright is bold and energetic with a hint of influence from Russian composer Dmitri Shostakovich. It contains references to the choruses ‘Dare to be a Daniel’ and ‘I’ll stand for Christ’.

Peter Graham’s brilliant overture To Boldly Go provides a fitting finale to the CD. Like most of his compositions it is a masterwork of brass band writing.

As if all that isn’t enough we get a bonus track! As a tribute to Simon Birkett, a former baritone player with the band, we hear a performance by him, which was made some years ago, of Ray Steadman-Allen’s arrangement of My Story and Song, better known to us non-salvationists as Stephen Foster’s ‘Beautiful Dreamer’. It is just so beautiful in its simplicity.

So, here we have a mixture of happy joyous music, and serine devotional music. Much of the music has a devotional content which I guess will encourage believers to reflect on their relationship with God. But whatever one’s belief’s there is a lot of beautiful expressive playing to be enjoyed.

This is the ISB playing at the high musical and technical standard that we have come to expect from them. There is a variety of musical styles that will please all who appreciate good music performed at a high standard. This is a recording that I shall go back to time and time again. On a personal note, I felt uplifted as I listened to it.

For some years Simon Birkett assisted the band as an Associate Producer where his attention to detail and wonderful musicianship were valued immensely. The ISB was shocked and saddened of his passing and acknowledges his contribution to the life of the band by featuring a solo he performed with the band some years ago.