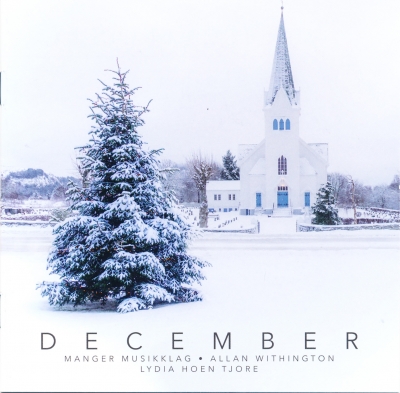 A nice pre-yuletide rosy glow lit up our faces as we opened the package containing the latest CD to review. "December" (seasonally titled) played by one of the world's best brass bands, conducted by Alan Withington whose pedigree is top class.

Mitt hjerte alltidd vanker opens the disc and is sung by Lydia Hoen Tjore, this is an old traditional Norwegian Christmas song dating back to 1732. I have to say it wouldn’t be my choice for an ‘opener’ to a disc but I see where it fits as it has basis in the Christmas Story. There is more to come from the vocal soloist later.

A beautiful rendition of Silent Night arranged by William Gordon follows and is played with delicacy and tone.

Troika from Lieutenant Kije – one of the most popular seasonal pieces of music whilst not actually having anything to do with Christmas, features next and is a robust, sometimes very robust, swing style performance. This band really capture the concept of swing – something many brass bands try but fail to master.

O Vos Omnes – arranged by Tina Kvammes again. Taken from the Roman Catholic liturgy for Holy Week. The piece starts with beautiful choral singing with responses by the band. It took me a few ‘listenings’ to enjoy this piece fully but it is lovely.

Hallelujia, Vor stride er endt is the last verse of a Danish Christmas song (In this sweet season). Another slow tempo piece (fifth from six pieces so far) that, according to the comprehensive programme notes, is often sung at funerals as the body is interred. Cornet – Anne Britt Hermannsen Vetas and Flugel – Randi Hulm. The soloists play this duet beautifully with gorgeous tone and synergy.

The Kingdom Triumphant – by Eric Ball comes next. I have to admit to a feeling of relief for a more familiar piece. This is truly a masterpiece universally. Played so well by Manger on the recording with lots of musical ‘space’ created by Alan Withington. Loved it.

Julesang – arranged by Ray Farr is actually ‘O Holy Night’ sung by Lydia whom we heard on the first track. Very nice version and a masterful arrangement from Ray Farr. Her voice really suits this piece.

Det Hev Ei Rose Sprunge (Lo, How a rose e’er blooming) – Soloist Lydia Hoen Tjore. This piece is over nine minutes long and is again of a slow tempo. After an instrumental introduction we hear a male spoken statement in Norwegian followed by Lydia singing what is originally a Christmas Carol from Germany.

O Magnum Mysterium by Morten Laurisdsen. A seasonal favourite of mine has so much space here. The individual contributions are absolutely top notch and this is as good as I can imagine any band playing this – beautiful.

Dance of the Buffoons from The Snow Maiden, Tchaikovsky. Crisp, precise playing of this romp. Technically brilliant with massive attention to detail and a massive range of dynamics. Brilliant!

Deilig er Jorden is described on the sleeve notes as ‘one of the most famous hymns in the Nordic countries’. The listener will instantly recognize the tune. Quite short but very well-played as is every track on this collection.

Alan Withington has never backed away from daring to be different in his programming – I remember the brilliant offerings he has prepared bands to perform at major concerts and contests. This CD has 12 tracks – ten of them are slow tempo albeit radically different in construction and idiom. The two quick tempo pieces stand out sometimes as a respite from the other repertoire here.

I am sure that if I were in a similar position in Norway writing this review I would be reveling in the traditional Nordic and stylistic roots of the music, I still love it, I can enjoy a ‘revel’ about the virtuosity of the musicianship of all the performers but it wouldn’t be a programme I would construct.