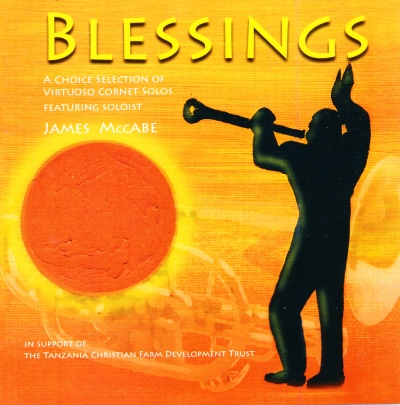 The CD features James McCabe, current principal cornet of the Rothwell Temperance Band, and proceeds from the sales are in aid of the Tanzania Christian Forum Development Trust. The repertoire is varied and gives James the opportunity to show his understanding of different styles.

The title track Blessings by SA composer David Catherwood has a feel-good character and James displays both his lyrical style and assured technique, well supported by the band.

Faure’s Apres un Reve follows and has piano accompaniment played by Thomas Guest, giving a more intimate feel to the performance. Another SA composer Douglas Court provides Standing on the Promises. The solo starts on Flugel horn before ending on a cornet. James captures the exhilarating mood of this work really well, but for this listener the Flugel part did sound like a cornet player on Flugel!

Jewels is written by SA composer Howard Evans and is based on the lyrics of a children’s song. David Catherwood provides the next track They Shall be Mine. This is based on the words of the song and is accompanied by the organ played by Andrew Crawford, creating a different sound colour.

James shapes the phrases musically, capturing the essence of the words which are printed in the CD notes.

Piano accompaniment returns for Rule Britannia by John Hartmann. Written in its day to show the virtuosity of the cornet and James does just that. He also arranges the next piece Bonnie Mary of Argyle, a Robert Burns folk tune, and plays it with panache. Adoration by Felix Borowski was originally written for the violin. Again it has organ accompaniment and reveals the wide range at James’s disposal.

The final work is Rustiques by Eugene Bozza and is accompanied by the piano. This allows James to feature the many aspects of quality cornet playing.

Produced for a very worthy cause with top class playing I would highly recommend this CD.

3. Standing on the Promises - Douglas Court

5. They Shall Be Mine - David Catherwood