LARSSON IN BRASS - THE ISB PLAY THE MUSIC OF JOHN LARSSON 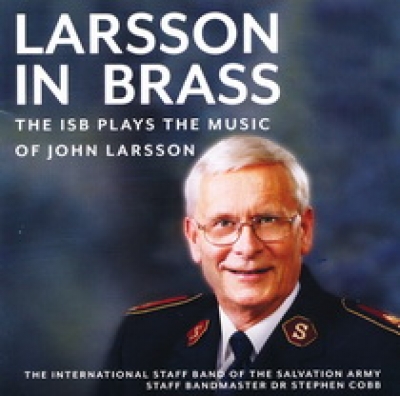 This CD consists of music taken mostly from the ten musicals John Larsson wrote with lyricist John Gowan's for the Salvation Army. The names of the arrangers such as Ray Steadman- Allen, Peter Graham and Bruce Broughton etc, whet the appetite before a note is played.

The first piece is the Festival March Abundance by Canadian composer Marcus Venables and featuring a song from the musical Hosea. The first musical the pair wrote in 1968 called Take-over Bid is transcribed so well by RSA. (On a personal note I was privileged to be the musical director when it was performed in West Yorkshire and the leading lady was the daughter of a certain Wilfred Heaton!)

A Special Moment was written by John with his mother providing the lyrics and Steven Ponsford provides a sensitive reflective piece. Peter Graham’s Music –Maker follows and is a skilful arrangement of four of John’s original melodies. Music from Hosea is next and Hollywood composer Bruce Broughton brings his professional flare to the arrangement. The trombone section shine in Wonders begin when The Lord comes in, which is another song from Take-over Bid.

John’s son Kevin provides the setting of Fill the world with Glory! , originally published as a songster (choir) piece. RSA again provides a selection from Spirit using his considerable artistry to bear.

Derick Kane is the stylish soloist in his own composition called That’s the Spirit from the same work.

Australian composer Sam Creamer brings his own arranging skills to The Kingdom is theirs, using songs from two musicals to create a scintillating work. John’s only published work for brass is the march It’s New using a song from the above mentioned Hosea. It is a rhythmic street march played with swagger by the band.

Spirit Breeze by John was written as theme for the CD and is arranged by Kevin, capturing the sensitivity of the music.

Robert Redhead provides the next three tracks using themes from Glory! and imaginatively describes the opening of the SA work in Folkston. It is aptly called Here they Come. Originally written for smaller bands, (Unity Series) Kevin Larsson has expanded The Fruit of The Spirit for full band. The cornet section displays its considerable skill and musicianship with a sparkling performance of The Spirit in Me! Written in eight parts it is another winner from Kevin.

The final track, again by Kevin called They shall come from The East is an African style arrangement of music from ‘The Blood of The Lamb’ – even featuring the band singing in Swahili!

The SA is indeed blessed to have such a gifted tunesmith as John Larsson. If the music had been written for secular shows in the West end it would have brought the house down. The ISB under Stephen Cobb bring out all the varied characteristics of the music, played at the highest level and featuring some moments of exquisite soprano playing from Gary Fountain.

6. Wonders begin when the Lord comes in ! - Ray Steadman-Allen

10.The Kingdom is theirs - Sam Creamer

16. The fruit of the Spirit - Kevin Larsson

18. They shall come from the east - Kevin Larsson