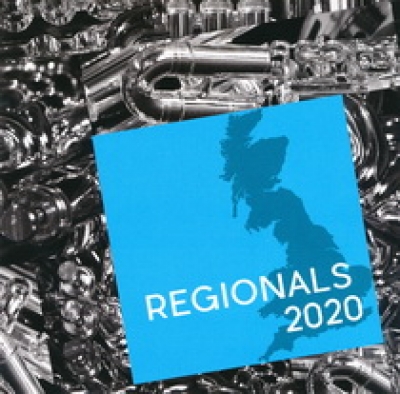 A very blue and grey CD arrived today. The most recent in a long series of annual recordings of the Test Pieces chosen for the National Championship Regional Contests.

I have commented many times about what purpose such a set serves: entertainment? ‘how it goes’ versions to be emulated by MDs of competing bands. Archives?

What we have here are five pieces of music played by four of the world’s top bands led by top conductors. So, a good quality feast of music is promised.

This year, the contest has broken new ground with four of the five pieces commissioned from four of our younger composers; Tom Davoren, Kit Turnbull, Andrew Baker and Christopher Bond.

The test for the Championship Section bands is the first track of the CD, A Tale as yet Untold by Philip Sparke. This is the ‘oldest’ piece of the set, and is the contest recording of Cory at the 2010 European Championships when they emerged as Champions. This performance is truly excellent, the band was on form and the listener will enjoy the reading by Bob Childs. The 18-minute, three movement work is a test of musicality, technical ability and endurance. As test pieces go, such a long test piece is sure to test the areas in terms of timetabling and organisation (speaking from the wilds of Yorkshire with the prospect of fifteen bands, this will be a ‘bring sandwiches and towel’ session for sure). Recorded contest ‘live’ performances clearly have a wide interest for the listener and this one is a cracker.

Legacy for Brass Band by Tom Davoren, this year’s First Section Test follows and is performed by Brighouse and Rastrick led by David Thornton. This is the second version of the piece, which was originally commissioned for Tredegar Town Band (in a shorter version) to celebrate the life of Aneurin Bevin. The ‘contest’ version is in three connected movements. On repeated listening to this piece, different layers of the music emerged and made me think that the conductors and adjudicators over the regional series will need to be so well-aware of this piece and the hidden story within. I absolutely loved this piece and look forward to hearing it next year. The final march is particularly ‘special’.

Second Section Bands will be tested by “The Golden Sabre” by Kit Turnbull. Really informative sleeve notes tell the story of Denis Davydov, a multi-faceted character born in the late eighteenth century, who was awarded the Golden Sabre in recognition of his courage in a battle between his Russia versus the French in 1807.

The piece is described as a series of musical portraits of Davydov and his battles in the year 1812. Although played continuously, the different ‘scenes’ (12) are quite distinct. Quite a stern test for the conductors again to eke out that special ingredient to win. This version is recorded by GUS with Chris Jeans in firm charge of his ‘troops’.

Andrew Baker’s Endurance is next year’s Third section Test. I listened to the piece, recorded here by Fodens under Mike Fowles, before reading the extensive programme notes and enjoyed the ‘music’ of the piece. Having listened again with the ‘story’ of Shackleton’s ill-fated expedition to the Antarctic of 1914 in front of me, I could see the overall shape of the story told by Andrew as he laid the notes down on the page. I think the piece will stand quite well alone in a concert programme as well as on the contest stage. Is it a ‘classic’? I don’t know, the audiences should enjoy it, the players will have plenty to do and overall, I think a very worthy piece of music well-written. Fodens are brilliant on the recording and Mike Fowles does his usual, very musical interpretation of the score.

Neverland by Christopher Bond will suit the fourth section bands this year for sure. Three movements, all quite tricky in different ways and clearly telling the story of the boy who never grew up. ‘Journey to Neverland’, ‘The Windows that Closed’ – quite a melancholy slow movement, and finally ‘Aboard the Pirate Ship’. Very descriptive and I am sure I would enjoy introducing this piece over many concerts to audiences and telling them the story behind it. Cory perform on this recording and as we would expect with Philip Harper ‘Master Story-teller’ at the helm of this voyage, there is real magic to listen to. This is my clear favourite on this CD, it is set just about right, in my humble opinion, for all levels of our fourth section bands across the country, there will be a wide variation in the end performances, but – it’s a good piece of music.

Debates are perennial over the degree of difficulty and whether pieces are appropriate for each section. Have they got it right this year? I don’t know. I guess the qualifiers to the Finals will say ‘Yes’ and the others will get ready for next year. I enjoyed the music on the CD and applaud loudly the decision to get this ‘new blood’ to contribute pieces (sorry Phillip Sparke isn’t technically in this category, but his piece is a cracker).

The sleeve notes are comprehensive and essential reading, the colour scheme is certainly ‘distinctive’ and your reasons for buying it will be as varied as the music on it.