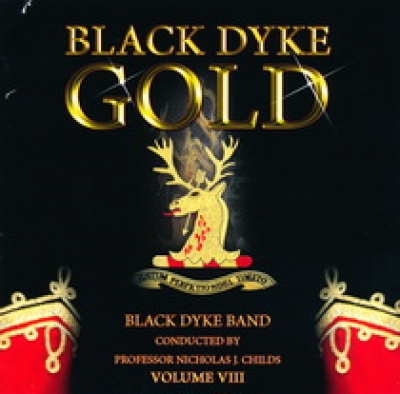 It has been the policy of the previous recordings of the Black Dyke Band Gold series for the music to reflect a typical brass band concert programme and the policy continues in Volume VIII.

The disc opens with the popular march Blaze Away. Frank Wright’s masterly arrangement of Verdi’s overture to his opera The Force of Destiny follows. It begins with the opera’s ‘fate’ motif, an ominous three-octave chords, for all the main characters are dispatched one by one. In this splendid performance the virtuosic qualities of the Black Dyke Band clearly shine through.

A further contrast in mood follows with Terry Camsey’s lovely cornet solo Melody of the Heart The band’s Principal Cornet Richard Marshall, makes all the difficulties sound effortless in this superb performance.

The opera Le Cid by Jules Massenet tells the story of a 12th-century Spanish warrior. Howard Snell arranged this melody from the opera which allows the band to display their sonorous sound.

Black Dyke at the Movies is always a popular item in their concert programme and this set has been compiled by Andy Wareham, the band’s young composer in residence. Commencing with Overture arranged by Andy Wareham, followed by Andrew Duncan’s arrangement of John Williams music for the Harry Potter films. Next is Darrol Barry’s arrangement of Bill Conti’s music For Your Eyes Only, which features Zoe Lovatt-Cooper, Siobhan Bates, Allison Childs, Sammy Latus and Katrina Marzella with the set’s finale Wheel of Fortune, all performed to Black Dyke’s high standard.

The luscious sound of Zdenek Fibich’s well known Poeme in James Ord Hume’s arrangement prefaces the longest item on the disc, Rolf Rudin’s The God Particle. Composed for the 2015 set test piece of the European Brass Band Championships. Inspiration for the work was the discovery two years earlier of the Higgs Boson particle. The piece is not a conventional test piece in concept or design and the eight movements and over 20 minutes in duration is one of the most difficult in recent years. Here Black Dyke produce a very fine performance of this immense work.

Trombonist Arthur Pryor, a member of the famous Sousa Band, composed several trombone solos which it was reported, he stated that the pieces were so difficult no one else could play them. Black Dyke’s Principal Trombone player Brett Baker delivers a stunning performance of Pryor’s Thoughts of Love.

To bring the disc to a close are two pieces that will be familiar to lovers of brass band music. Firstly, Howard Lorriman’s arrangement of the Ashokan Farewell which he named Farewell and secondly an arrangement by Keith Wilkinson of the Bacchanale from Saint-Seans opera Samson and Delilah that brings the concert to a fitting close.

This excellent and enjoyable album of fine music gives the listener some 76 minutes of pleasure. It retains the high quality that this series of recordings have produced over the years and is of a ‘Gold’ standard.