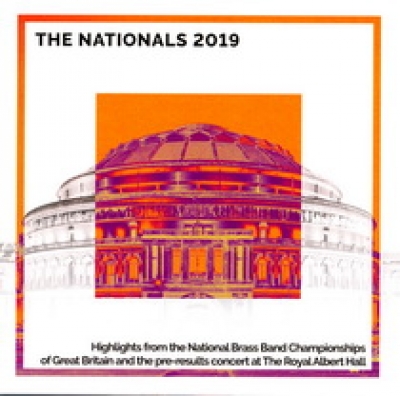 The title says it all, though I believe THE CHAMPIONS would be equally accurate as all the actual winning performances from each section are included,

However, the CD isn't just about test pieces, The light relief of concert items from the championship section runners up is a welcome addition.

Thanks to the copious notes provided by Paul Hindmarsh, listeners are able to set the scene before settling down to a very pleasant and rewarding unique concert with a difference.

Crafted by master craftsman Philip Harper, this is indeed a masterpiece of storytelling through music. Superb playing throughout the band with stunning contributions from the soloists particularly Steve Stewart who was awarded Best of the day.

Light relief follows with Richard Marshall Black Dyke bringing the audience to their feet with Percy Code's cornet solo Zelda. Richard puts his individual stamp on this old classic. Maybe a few too many embellishments for some, but wonderful playing throughout.

Directed by Martin Hall.   What a musical treasure this is, and so well played. 4th section test pieces are constantly improving. Based on an old hymn tune It flows smoothly through the variations, with lots of musical features and colours. Hopefully this piece will be heard in many concerts after hearing it on this CD.

This is a very descriptive piece, with four linked sectors, showing the Vikings were not just warriors, but had other softer sides to their lives. Shades of Fraternity are evident, and I was also transported by quickening descending chords reminiscent of Life Divine. There are some beautiful moments allowing the soloists to shine, and the hymnal sector a joy to hear,

From their ever-growing entertainment library Black Dyke (under the direction of Professor Nick Childs) are continuing to increase their already huge fan base, by featuring current popular music, played and presented superbly. This small compendium begins with a busy little overture composed by Andy Wareham who links it nicely to Harry Potter and For Your Eyes Only, featuring the excellent 'middle of the band ' for which the Black Dyke is famous for. A refreshing departure from the contest stage.

This is a typical Gregson piece, always musical with a very lyrical solo to boot. It seems to have been in the shadows compared to Plantagenets and Connotations but deserves more airings. Although, it was composed for the National Youth Championship, don't let that detract, as Occasion is not easy. This performance certainly does it justice to give South Yorkshire Police the 2nd section title.

A highly descriptive piece depicting Capt. Cook's journey into the unknown, the trepidation, then a strange land appears, with all things new, Australia.   There is beauty, fear, triumph,.all within this fine piece. Unison Kinneil handles the complexities admirably, steered to victory by Ray Tennant.

To summarise, This CD represents all that is best in contesting. It is not completely flawless as these are live performances, under pressure, but nothing which detracts, A really enjoyable CD which I enjoyed hearing from start to finish. Highly recommended.