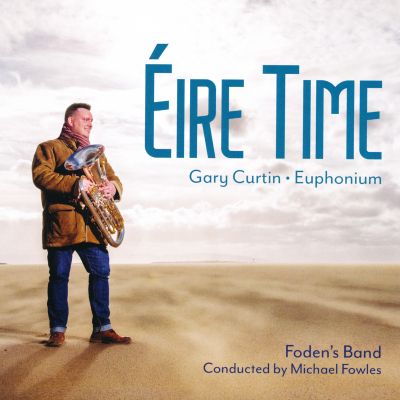 The title track written by Andrew Price gets this CD off to a cracking start. In the form of an Irish jig, with a slower middle section, it reveals what is to come with the soloist displaying virtuosic technique, musical timing and a wonderful legato production.

The two major works are both euphonium concertos Cantiphonia by Bert Appermont arranged by Paul McGee is in the standard three movements.

This is followed again by faster music with scalic passages leading to the end. Gary uses his top drawer technique to allow the music to speak.

As the title suggests this is a ballad ‘sung’ by this gifted musician through his instrument. Wonderful.

Effective dissonance introduces the soloist who breaks into rapidly articulated passages, followed by brief whimsical moments before returning to the virtuosic music. Momentum is gathered for a few bars leading to the cadenza, allowing Gary to display his talent, after which band and soloist romp home

This is a great concerto receiving a stunning performance.

The second concerto – Deep Surge by Tom Harrold is quite different; aggressive in nature, pitting the soloist against the band in a combative environment. The middle section starts with a still, muted introduction leading to a more reflective style with a feeling of yearning from the soloist for a sense of direction. This is followed by more conflicting musical ideas with the solo line just managing to ‘stay afloat’. This piece contains quite disturbing music which requires a different approach from both band and soloist. They both rise to the challenge.

There are several more pieces of a virtuosic nature all be it in varying styles. The slower pieces show Gary’s enviable production and sense of line and phrase.

From Your Smile by Paul Lovatt-Cooper was commissioned by Gary and his wife Leanne to celebrate the birth of their son Jamie and is a particular gem. A lovely melody played from the heart.

Unusual for an instrumental CD there is a vocal solo Get Here if You Can by Brenda Russell arranged by John Barber. Passionately sung by Gary and well accompanied by a non-brass quartet it doesn’t reach the level of performance achieved in the other tracks.

The playing and musicianship of the variety of tracks shows Gary to be in complete command of his instrument; his non excessive use of vibrato being particularly pleasing. Succinct programme notes are included by fellow top euphonium player David Thornton.

I would highly recommend this CD to you.

7. From your Smile (for Jamie Elis Curtin) - Paul Lovatt-Cooper *