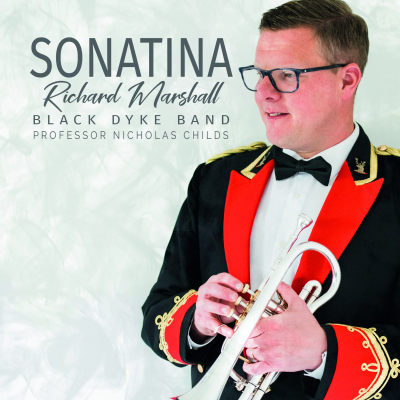 The CD opens with the premiere studio recording of Cornet Concerto by Denis Wright. Originally written for cornet and military band and dedicated to Harry Mortimer who gave the first performance with the BBC Military Band. Subsequently it was rescored for brass bands.

The first movement, entitled Allegro allows the soloist to display his technique and give a beautiful performance including a sparkling cadenza. The second movement – Canzonetta – is lyrical and full of expression which ends in a whisper. Movement three – Rondo – goes with a will and ends triumphantly.

Elgar Howarth was commissioned by Black Dyke Band to write a new piece ’in your own style’ for their principal cornetist. He felt free to exceed normal boundaries both musically and technically. The modest title Sonatina belies the technical and virtuosic demands ahead.

Movement one is fragmentary in style for the soloist and band, with the soloist taking centre stage. The second movement is calmer and simpler in style and tonality. A dramatic cadenza section introduces the third movement with brilliant finger-flying material, which ends with a dramatic flourish from the whole Band.

The first UK performance of Martin Ellerby’s Cornet Concerto was given by Richard Marshall with Black Dyke Band, conducted by Nicholas Childs, in January 2014 at the Bridgewater Hall, Manchester. The three movements are entitled Brilliante, Arietta (a short aria) and Rondino. The opening fanfare figure creates a happy rhythmic feel that bounces along, followed by a pleasing cantabile theme, which leads to a cadenza section accompanied by the percussion, prior to a coda that allows the movement to conclude quietly. Legato passages sing out in the Arietta which are shared by the soloist and band in lyrical partnership. Rhythm is the feature in Rondino, with constant changes of metre that creates a restless journey towards a dynamic conclusion. This is a delightful concerto full of tunes that please the ear and would be a welcome item in a concert programme.

The Cornet Concerto was written by Edward Gregson for Richard Marshall and Black Dyke Band, which was premiered at the European Brass Band Championships in Lille, France, on April 30, 2016.

This virtuosic concerto exploits the full range of the cornet from high to low, demonstrating in Richard Marshall’s expert hands the instrument’s agility, flexibility, and lyrical warmth. The three movements are entitled Sonata, Intermezzo (of more distant memories) and Rondo.

Four main ideas form the basis of the expressive first movement along with cadenza’s and bugle calls. The second movement is intended to take the listener back to an earlier era of brass band writing. Brief quotation are from three cornet solos composed by Erik Leidzen and from Edward Gregson’s earlier work ‘Of Distant Memories’. The final movement opens lively with cascading arpeggios for the soloist. A lyrical theme woven in provides a brief moment of calm before a reprise of the opening cadenza leads to a climatic close.

Each of the four works demand an exceptional virtuosic and technical quality of performance. In this recording, Richard Marshall overcomes the challenges with relevant ease and produces an amazing response, delivering the finest cornet playing that one could ever wish to hear.

Needless to say, Black Dyke Band’s accompaniment is, as usual, exceptional throughout and enhances the whole recording.

This CD must surely be awarded the solo disc of the year.