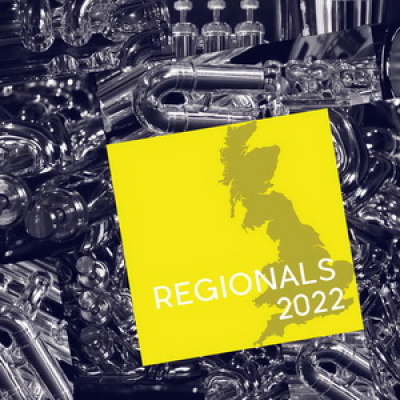 This CD contains the set works for the Areas 2022. The quality of the recordings varies quite a lot. None of the pieces are new.

This is the other work for which I have the score.   As the impeccable programme notes about the composition are given by the world authority on Wilfred Heaton’s music, Paul Hindmarsh, I can add nothing so will reflect on the actual playing.

The band and MD get off to a bold and precise start, observing the time changes but always allowing the music to flow.  The recorded balance is not as always well defined – there are moments in the playing where the middle of the band is hardly audible.  The quiet ending is great.

The exposed wide intervals in the solo cornets are handled confidently with harmonic from the tutti trombones.  A real atmosphere is created.  As the music unfolds the different sections add to the texture.  The lone solo cornet from letter D to E has the musical line supported by Euphonium and Eb bass and the muted cornets playing quite dissonant chords underneath, and this adds to the atmosphere, ending with the soloist holding a high C# marked lunga before slurring effortlessly down to middle F#.  Nerves of steel required here.  Cornets and trombones continue until the whole cornet section play down to middle B diminishing down to a niente finish.  In this movement, as in the whole piece, not one note is wasted and for the players definitely nowhere to hide.

Only marked crotchet = 126 nevertheless professor King and the band exude the lively and vigorous character of the movement, even in the quieter sections. Lots of harmonic colour and cross rhythms add to the excitement. A sudden Bb major chord appears as a momentary breath of fresh air and the reference to ‘old uncle Cobbley and all’ shows Mr Heaton’s ‘tongue in cheek’ humour. Those with scores will note there are no key signatures at all leaving problems of key and intonation to be mastered. This is an iconic work by a wonderful composer, years ahead of his time, and is performed superbly well by the YBS band.

This piece broke many traditional ways of composing for Brass Bands.  As the title implies the tasks of MD’s and players alike is to interpret the colours contained in the piece.  It gives the term ‘tone colour a very real meaning.  It was a severe challenge when introduced to bands but has since been recognized as one of the major test pieces of the 20th century.  This excellent recording shows an MD and band in full control. It will test 1st section bands to the full.

A studio recording that has real presence.  Drawing onhis love of aviation since boyhood the composer paints pictures in sound reflecting the same.  Much of it reminded me of film music.  This will be a good test for the 2nd section, where the spirit of the music needs to be realised, with technique being the servant of the music.  The playing of Foden’s is top drawer and the MD always gives space and time.

Played by the Leyland Vehicles Band conducted by Richard Evans

This recording was a private undertaking and originally on cassette tape.  The overall result is one where there is a lack of balance and clarity in places. However, the musical fingerprint of Gordon Langford is evident throughout.  There are four sections.

A short movement of contrasting rhythms and harmonies with traps to be avoided.

A rapid movement with lots of detail to be mastered, needing a sure technique and a good dynamic range.

One section allows the trombones to indulge in controlled fun.

Marked Andante Religioso This will be a good chance for MDs and players to show their musicality.  As the composer was present at this recording, I was surprised by the MD conducting the tempo marked crotchet = 84 at about crotchet = 66, which is much more fitting for this music and gives the chance for bands to show their cantabile playing and for soloists to shine.  There is nowhere to hide in this movement.

In three sections, this recording is from a live performance and so lacks the immediacy of a studio recording.  That said the reading by the MD and the playing of the band is of a high standard.  The ensemble produces a rounded well balance sound with mostly good intonation and is served well by the soloists. The percussion sections contribution should be noted, never over-the-top in volume but adding rhythmic interest and colour throughout.  This is a really controlled performance.