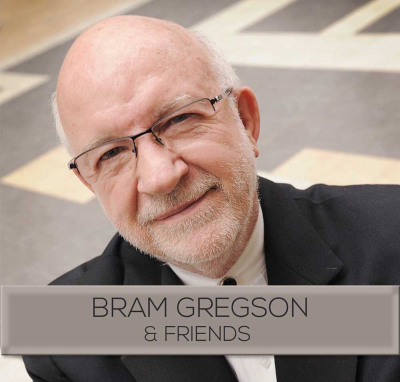 This two CD set is a cornucopia of great music composed and arranged for brass as a tribute from Edward Gregson to his deceased brother (2018) Bramwell (Bram) Logan Gregson.

Bram was born on Merseyside in 1934 to Salvation Army Officers (Ministers). Like all Officers, the family moved around and arrived in Sunderland (where Edward was born), and where Bram went to the local grammar school, later playing bass trombone in the Scarborough SA Band.

On joining the Coldstream Guards on Euphonium (where bass clef was ‘de rigueur’) he became a member of an outstanding ensemble, many of whose members later moved into the mainstream music profession. Moving south, he became a member of the Tottenham Citadel Band (TCB) then headed by Ray Steadman – Allen (RSA). Upon RSA's departure Bram become Deputy Bandmaster under James Williams, and together, they improved an already outstanding ensemble, generally recognised to be second only to the ISB.

Whilst in the Guards and the TCB, Bram had toured overseas including Canada and in the early 60s he and his wife Ann, like many other Brits, decided to make their home there, whereas a civil engineer he focussed on public housing projects whilst dedicating his musical creativity, initially, to the London Citadel Brass Band of the SA.

Over a period of 53 years, he directed three top class Canadian ensembles – 25 years as Bandmaster of The London Citadel Band, (based in the Southwest of Ontario); Intrada Brass Ensemble of Oakville (a brass band format and instrumentation but outwith the SA) - based in Toronto - ‘dedicated to furthering the Brass Band tradition in Canada and fostering the development of Canadian music composed for brass band’.

The ensembles, well known and respected in the North American continent, produced more than 30 recordings under Bram’s leadership and as Producer. They performed many genres and are a lasting legacy to his own musical interests, his musicianship, hard work, his leadership and creativity.

The fact that no major record company ever distributed these recordings meant that many were known only to aficionados and supporters.

Over the years many overseas musicians visited Ontario - conductors such as Harry Mortimer, Ray Bowes, Bernard Adams and Ray Steadman-Allen; and soloists such as Ifor James, James Watson, Russell Gray and the brothers Nicholas and Robert Childs (here both as duetists and as soloists).

In this double album Bram Gregson’s embraces the Army repertoire (both with LCB and Intrada). These recordings exemplify his talents as a musician, as a conductor and leader and band trainer, working with soloists and composers comfortable from different genres.

The ‘tribute’ album ‘Bram Gregson and Friends’ - draw on 12 of those CDs and vinyls – some still available via the web and some tracks via streaming services.

The concept of a ‘tribute’ album was original discussed between Edward and Bram as an 80th Birthday celebration, a significant number of tracks identified and reaffirmed shortly before he died after his brief illness.

CD 1 contains 14 tracks by the London Citadel Brass including classic SA repertoire such as ‘Symphonic Rhapsody’ by Edward Gregson (sketched out for his brother to play in 1962 when EG was only 17yrs old); ‘The Kingdom Triumphant’ – Eric Ball (1962); Wilfred Heaton’s Toccata ‘Oh The Blessed Lord’ circa (1973); and specially commissioned works such as ‘Covenant’ – Bruce Broughton (1987) and ‘Timepiece’ - Norman Bearcroft (2006).

A personal favourite (‘Sorry Guv’ - my perk) which also has an Arthur Butterworth ‘connection’ is ‘Celestial Prospect’ by William Heaton. Heaton was a modest man, a neglected composer and averse to self-promotion. In this recording LCB gives a strong, authentic, crisp, sympathetic, and commanding performance.

Originally composed in the 1940's and is thought to have been rejected by the SA Editorial 'chiefs' as being too modern. The original manuscript lost for many years turned up in New York in the 1980's, was then re-worked by Heaton for the New York Staff Band, and now accepted as a classic of the SA 'Festival' genre. Used as a Test Piece (2nd Section - 2003 'Regionals) and is also featured in ‘The Heaton Collection’ by Black Dyke Mills Band.

The rest of the disk includes a selection of shorter, but no less substantial or challenging works, including old favourites such as ‘The Old Rugged Cross’, ‘What a Friend’ and ‘Minneapolis IV’.). This impressive selection of the familiar and less familiar concludes with a moving performance of ‘How Sweet Thy Name’ – by Ronald Tremain who had emigrated to Canada in the 1930’s. Arranged by Donald Osgood (NB - one of this reviewer’s teachers) , a fitting conclusion to CD1

Intrada includes 4 tracks of SA classics – a sparkling performance of ‘Trittico’ by James Curnow, ‘Rhapsody on Negro Spirituals’ and ‘Pavilions of Praise’ (RSA), ‘There is Balm in Gilead‘ by Canadian born Douglas Court - with players and conductor on top form.

The rest of the programme consists of ‘big band’, swing era standards; the whole programme played with verve, conviction and authenticity.

Throughout, performances are enhanced by high quality of the percussion playing. (Some of us remember when percussion in a brass band was limited to bass drum, side drum and cymbals – sic)

To summarise. This is a fine tribute to Bram Gregson- a consummate musician and leader. The quality of the recordings and subsequent ‘mastering’ exemplify his talents – with three very different brass ensembles producing recordings of high quality brass indeed.

The producer of these CDs is Trevor Caffull, they are well presented, visually attractive, and beautifully illustrated, with a comprehensive commentary from Edward and some of Bram’s friends all illuminated by perceptive Programme notes from Paul Hindmarsh.

This is a ‘must’ purchase and excellent value.

NB. At the time of writing this review it is more than possible that Christmas in the UK will again be ‘cancelled’.  Whatever political dithering there may be  get ‘Bram Gregson and Friends’ on that Christmas list’