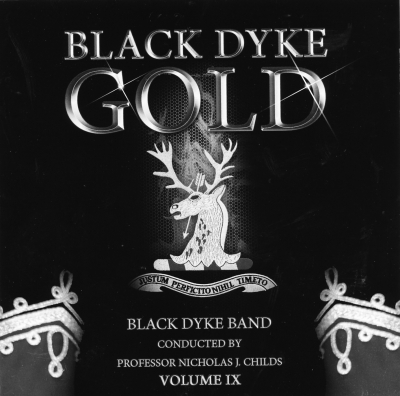 This CD by Black Dyke Band is the latest in the ‘Gold ‘Series. Started  in 2012, following a decade and more of the ‘Essential Dyke’ recordings, Black Dyke Band this series, showcases the band’s repertoire, unique sound and great soloists.

Volume IX continues that pattern with a wide-ranging programme you are likely to hear at one of their concerts. Significant and challenging works from Peter Graham and Bruce Broughton form a substantial part of this CD plus two new compositions and familiar audience favourites. With the band in top form, featuring a newer generation of talented musicians, we are treated to an imaginative programme under Nicholas Childs’ leadership.

In a strong opener the band plays ‘Harlequin’ by Bruce Broughton. The ‘Harlequin’ figure, featured in Italian Commedia Dell’Arte, a memorable, lively, athletic and colourful figure is easily recognisable in his distinctive costume. Broughton’s work, a cheerful and friendly account involving the whole band is tuneful, contrapuntal music played with aplomb and a ‘joie de vivre’ – by a band at the top of its game.

Peter Graham’s ‘Dynasty’ is a tribute to the life and work of legendary Harry Mortimer reflecting on his life set out in his autobiography ‘On Brass’ (ISBN 0906670047 Alphabooks published 1981). Note - that book, by the way is a great read and a personal and historical record of HM and banding during a large part of the 20th Century.

Constructed in the form of a Symphonic poem or ‘through music’, ‘Dynasty’ consists of seven interlinked and cross - referenced movements entitled ‘Harry’, ‘War’, ‘Theatre,’ ‘Journey’, ‘Together’, ‘Farewell’ and ‘Amen’.

Starting with a four note motif (Harry’s theme) – Richard Marshall sets the tone, the timeline begins and drama unfolds including ghostly whistling from confident, but recently recruited soldiers, marching to the unknown horrors of WW1. The sound will still resonate with listeners of a generation who lost family members. There are references to compositions such as Sovereign Heritage, Labour of Love and The Severn Suite, all of which featured in Harry’s career as a player and conductor. The final section, starts with a spirited and brisk ‘The Trumpet shall Sound’ from Messiah and a reprise of earlier themes, leads to a triumphant ‘Amen’.

The music demands total competence, flexibility and maturity to reflect the wide palette of colours demanded by Peter Graham, and top class solo playing from all sections of the band in an exhilarating score. This recording makes light of the technical challenges and delivers an excellent reprise of its stunning performance in 2019 at the World Band Festival in Lucerne. Thank you Peter Graham and the BDB.

The first featured soloist is Euphonium player Daniel Thomas. Born, taught and ‘nurtured’ in South Wales, ‘polished’ at the RNCM, he both maintains and enhances the tradition of holders of that seat at Dyke.

‘God in the Machine’ (Deus ex Machina), composed by Andy Wareham (Young Composer in Residence) and appointed to BDB in 2019, is inspired by the ancient Greek drama device where there is a sudden appearance of a person who provides a contrived solution to an insoluble difficulty in the plot. This, the last movement of the Wareham concerto, is outstanding - rhythmically complex it requires facility over the whole range of the instrument (and bits we didn’t know existed). At times sparsely scored, the soloist, supported by equally virtuosic brass and percussion players is breath – taking.

The central section of the CD shows the band in a lighter, but no less disciplined mode, providing pieces found in a large number of concert programmes. ‘Cornet Roundabout’ composed by ‘Maestro’ Edward Gregson under his pen name Robert Eaves, features Richard Marshall, Jon and Tim Hammond who provide a clean, technical and lyrical performance, sensitively accompanied by the band.

There follows a composition known to all brass band audiences. ‘Bass in the Ballroom’ by Roy Newsome – often used to highlight the Eb Tuba, and sadly often given a patchy, comedic performance. Gavin Saynor – no buffoonery here - treats the audience to a delicious, serious musical performance where he shows qualities of tone throughout an extensive register, clean articulation and competence. Many of us remember how our expectations of Tuba playing were raised by proponents  such as Philip Catelinet and John Fletcher.  Gavin continues that tradition – a master class for all aspiring Tuba players.

A personal Black Dyke family connection is introduced with a performance of ‘For the Beauty of the Earth’ by John Rutter arr. Luc Vertommen. Dedicated to the mother of Nicholas and Roberts Childs (Morfydd Myfanwy) who died in November 2020 . Often seen at brass band events supporting her family. Here we have a beautiful, simple and moving rendering.

The CD starts and finishes with ‘Heroes’ by Bruce Boughton’. Written in 2019 to celebrate the 50th Anniversary of Apollo Moon landings (19 July 1969) it pays tribute to the 3 astronauts Neil Armstrong, Buzz Aldrin and Michael Collins. In three sections, as a through piece, it describes the launch – ‘Ignition’; rhythmically exciting and an intricate movement it transitions into ‘Tranquillity’ -  a lush, dreamy sound picture of The Sea of Tranquillity (great interaction between the soloists reminiscent of the best of chamber music) building into the final movement ‘Return’  bringing the work and CD to a magnificent conclusion

Gold Volume IX is a veritable ‘mélange de haute qualité’. Older readers will remember this inscription on a condiments bottle label – a description so applicable to these performances by Black Dyke.

Traditionally brass band audiences go to a band concert to hear ‘the band’; followers of choral and orchestral music regularly attend a concert not just because of the ‘band’ but because they want to hear the music being performed. How often are band concerts promoted advertising the works to be played? Only one example was spotted in a recent informal survey where only one item was identified. Are brass band audience too fragile and fickle; are there concerns from bands that this would be a step too far?