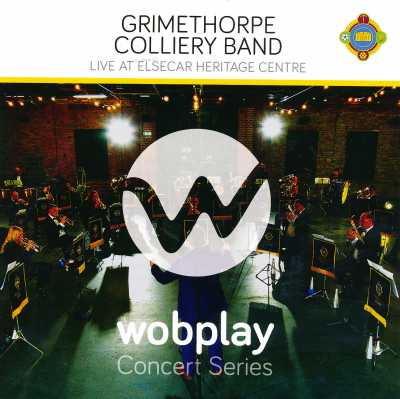 After a two break due to the Covid 19 pandemic, Grimethorpe Colliery Band recorded a live performance at Elsecar Heritage Centre under the baton of its Musical Director David Thornton. The programme of concert works chosen by the MD is to reflect a celebratory feel. The music is performed to the high standard we would expect from a top-flight band such as Grimethorpe, but for me, the recording is a little subdued at times; however, this doesn’t detract from the quality of the music.

The CD opens with an excellent composition by Composer-in-Residence Liz Lane entitled, Diamond Fanfare. The rhythmic drive and celebratory motifs keep the listener engaged throughout. Gordon Langford certainly knew how to write a decent melodic line and David Thornton has included an original Langford work and two skilful arrangements. Langford’s contribution kicks off with the joyful march Carnival Day and is followed by two brilliant brass band arrangements of the works of Gilbert and Sullivan & Rossini. A Sullivan Fantasy and La Danza are both played with ease and are good additions to the CD.

To partner La Danza, David Thornton has chosen another Rossini work, the humorous and clever Duet for Two Cats arranged by Howard Snell, and performed by Chris Binns on trombone and Seb Williamson on cornet. The band's principal cornet, Ian Culross is in fine form and produces a sparkling performance of Jubilance composed by Salvationist, composer and bandmaster, William Himes.

In October 2019 the band met American composer Jack Stamp and he agreed to become the band’s International Composer in Association. His beautiful Elegy is featured on the CD, this will certainly be enjoyed by the more devoted brass band fan, as well as the casual listener and is played with style and sensitivity. The band's principal euphonium, Adam Bokaris is well known for his stylish playing, and John Hartmann’s Fantasia on Rule Britannia arranged by Dan Price demonstrates how good a player Adam is. The CD concludes with a Howard Snell classic arrangement of Gershwin’s fabulous, An American Paris.