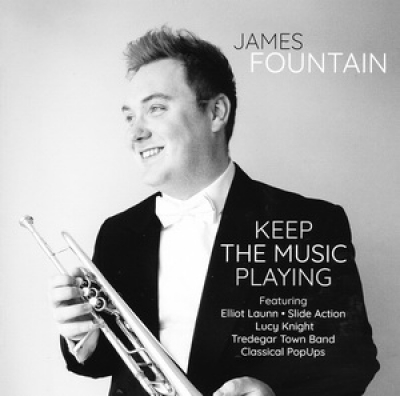 This disc was recorded by James during the period of the Coronavirus Pandemic when musicians, amateur and professional all over the world where struggling to come together and perform.

This recording sees James perform with different individuals and ensembles. The result is a very enjoyable and admirable experience indeed.

The first track is a classic cornet solo - The Southern Cross by Herbert Clarke. The Tredegar Town Band accompanies this masterpiece brilliantly, and immediately from track one, the listener should know that something very special is to come. Brilliant playing from James and the band.

And now for something completely different (as the saying goes) Bach's Concerto in D Major sees James swap his cornet for the piccolo trumpet in the arrangement for trumpet and piano. Any students who need examples of how to play music of the Baroque period with every musical ornament under the sun - listen on. This arrangement that spans three tracks is by James' friend and ensemble colleague Huw Morgan. Brilliant!

The next swap for James is to the flugel - How do you keep the Music Playing?, by Michel Legrand, this piece was written for the 1982 film 'Best Friends'.

Lush playing over every part of the instrument's range (and some).

Oblivion the starkly named composition by Astor Piazzola follows. Trumpet out of the case for this one. Accompanied by 'Classical PopUps' described on the well-produced sleeve notes which are written in the first person by James, as 'an ensemble of incredible professional musicians'. Yes, they certainly sound to be as James sets out on another exploration of the range and colour of the trumpet.

Du bist die ruh by Franz Schubert is up next, accompanied by 'Slide Action' - a prize-winning trombone quartet. A slow moving but quite intense piece of music.

Ben Hollings wrote the next piece Threnody for Kirsty Abbotts, when she was playing with Carlton Main Frickley Colliery Band (now the principal cornet at the Hammonds Band). Tredegar return to accompany James in a beautifully simple tune, lusciously played and accompanied.

Trials for Olwen opens with majestic piano chords leading to James' trumpet telling the story of the trials and tests set before a mythical Welsh folk hero. The musical and technical trials set by the composer Tom Davoren are massive - no surprise that they do not defeat James (the piano part is no pushover either!).

Music by Handel - Let the Bright Seraphim is a collaboration between James, Lucy Knight (soprano soloist) and the strings of 'Classical PopUps' in this well-known classic . Remember Phillip Jones and Kiri at 'the' Royal Wedding of Charles and Diana?

Brilliant and stylish from both soloists.

The next track features a composition requested of Toby Street by James for this disc. Kwai - accompanied by piano has no explanatory notes but is very modern in it's approach, wide-ranging in range and style.

Someone to watch over me by Gershwin follows - again accompanied on piano by Elliot Launn. This is my favourite (amongst many) track - James' gorgeous tone spreads over the music like a smooth creamy mist, never forced or indulgent.

Piazzolla's Libertango - well known and sometimes a bit overdone by some is next up for Classical PopUps and the Latin Trumpet of Mr Fountain. Technically brilliant and thoroughly 'fresh'.

Many CDs close with a musical 'Bang'. This doesn't in the usual sense of the word. For The Girl with the Flaxen Hair by Debussy is the haunting melody that James leaves us with. It is simply beautiful and his rich tone over the whole range of the Trumpet is absolutely up there with the best in the World.

As a reviewer I try to avoid repetition of adjectives but have probably failed miserably if 'Beautiful' 'Brilliant' 'Stylish' have appeared too often for the reader. This disc is all of that and more for me. Superbly played, accompanied and engineered.

By far the best solo CD I have ever listened to.


Warning: count(): Parameter must be an array or an object that implements Countable in /home/sites/chrishelme-brighouse.org.uk/public_html/templates/jsn_ferado_pro/html/com_k2/templates/default/item.php on line 180