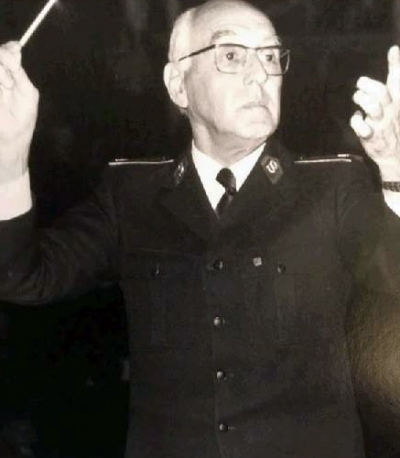 Lieut. Colonel Charles Skinner, b: 28.9.1911, Bishop’s Stortford, Hertfordshire
d: 24.02.1978, West Wickham, Kent, was a third-generation salvationist who first learned to play the cornet at the age of seven. His father, the then bandmaster at Bishop Stortford corps, was his first music teacher.

When, on leaving school, he came to work at International Headquarters (IHQ), he had the opportunity to further his musical experience by assisting well-known London corps bands as well as the International Staff Band. He also had the privilege of touring Sweden with the Tottenham Citadel Band about this time.

He later came under the direction of Arthur Goldsmith, who gave him great encouragement with his first efforts at composition. During this time, he played the Soprano Cornet in the men’s social work band, taking part in recordings and playing solos.

A self-taught musician, Charles Skinner studied theory and counterpoint while on the train, commuting to and from the office. He was often seen bent over textbooks, for not only did he study music theory he also studied shorthand. During this time, he also learned to play the pianoforte, concertina and piano-accordion, for which instruments he showed great aptitude.

Throughout the thirties, he was submitting music for publication, particularly in The Musical Salvationist, though the brass journals were soon to benefit from his compositional skills. His first composition, ‘I love the Lord’, won a prize, and was published in 1933.

He was appointed Cadet Sergeant-Major in 1934and went on to play Solo Cornet in the Liberators’ Cadets Band.

In 1945 he was appointed to the International Music Editorial Department, as a successor to Eric Ball. He was to serve there for a total of 22 years, eight of them as Head.

He was an instructor at the Army’s first English band camp, held at Hadleigh, in 1947. He was also a guest at the Adelboden music camp in Switzerland for several years, which he greatly enjoyed.

He was a member of the International Staff Band for 25 years. This included being Deputy Bandmaster, and, later, Executive Officer. He was the first playing member of the band for 50 years to be given that appointment. He had previously been Bandmaster at Regent Hall for a short time until a sudden bout of ill health caused him to give up the responsibility; he afterwards served as Deputy to Bandmaster Ken Cook.

His musical legacy will be for the many beautifully crafted songs within our vocal repertoire but it is also important to remember that his brass compositions and transcriptions, which include the strong Tone Poem ‘Heroes of the Faith’ which is this week’s show.