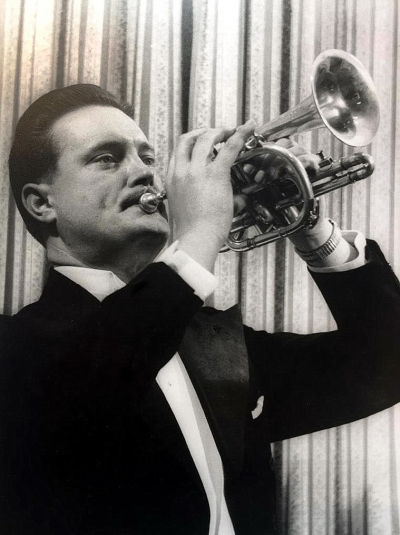 Derek Malcolm Garside was born in 1930 the, youngest son of Percy and Florence Garside. It was not long after Derek's ninth birthday that his father asked him what he wanted to start and learn to play. This question was asked as though it was expected that he would play some kind of instrument, just as the rest of the family did. Even today, Derek still cannot recall why he gave the answer he did and was something he probably said at the time on the spur of the moment without even thinking, 'a trumpet'.

Under the tutelage of Fred Roberts at the end of 1941 or possibly early 1942 young Derek had progressed enough to join Clifton and Lightcliffe Band.

Towards the end of 1943, he re-joined his tutor Fred Roberts, only this time as a player in the cornet section of Brighouse & Rastrick.

In December 1947, at the age of seventeen, Derek was invited to be the principal cornet for the C.W.S. (Manchester) Band, under the direction of Bandmaster Fred Roberts and along with every other member of the band he too was offered employment with C.W.S.

Derek Garside then showed his virtuosity, as a soloist on almost all of the recordings the band produced and his ability as a principal cornet.

On Saturday the 20th of October 1962, the became the number one band at the Daily Herald National Brass Band Championships at the Royal Albert Hall with their musical director, Alex Mortimer, playing Frank Wright's arrangement of Verdi's 'Force of Destiny'.

The rest, as they say, is history.

Derek celebrates his 90th birthday on March 9th and on behalf of everyone at Sunday Bandstand and the everyone from the brass band world we wish him a Happy Birthday.

A much long story of Derek's life in brass banding particularly with the CWS will be appearing on my website very soon.