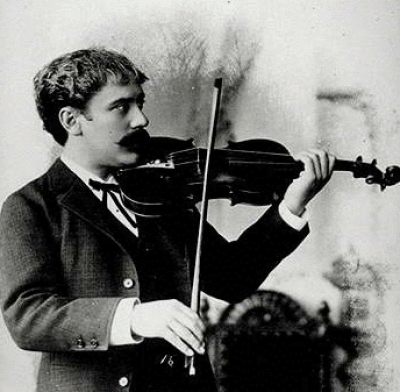 Pablo de Sarasate - March 10, 1844 – September 20, 1908 was a Spanish violin virtuoso and composer of the Romantic period. He was born in Pamplona,  the son of an artillery bandmaster. Apparently, after seeing his father struggle with a passage for a long time, he picked up the violin and played it perfectly. He began studying the violin with his father at the age of five and later took lessons from a local teacher. His musical talent became evident early on and he appeared in his first public concert at the age of eight.

His performance was well-received and caught the attention of a wealthy patron who provided the funding for him to study in Madrid and later at the Paris Conservatoire at the age of 12.

There, at 17 he entered a competition for the Premier Prix and won his first prize, the Conservatoire's highest honour.

He made his Paris debut as a concert violinist in 1860 and played in London the following year. Throughout his career, he toured many parts of the world, performing in Europe, North America, and South America. His artistic pre-eminence was due principally to the purity of his tone, which was free from any tendency towards the sentimental or rhapsodic, and to that impressive facility of execution that made him a virtuoso. In his early career, he performed mainly opera fantasies, most notably the Fantasia, and various other pieces that he had composed.

He died in Biarritz, France, on September 20, 1908, from chronic bronchitis. He bequeathed his violin, made by Stradivari in 1724, to the Musée de la Musique. The violin now bears his name as the Sarasate Stradivarius in his memory. The Pablo Sarasate International Violin Competition is held in Pamplona.

In 1900 he wrote his Introduction and Tarantella for solo violin and orchestra. On this show, we feature that solo arranged as a euphonium solo played by Steven Mead.