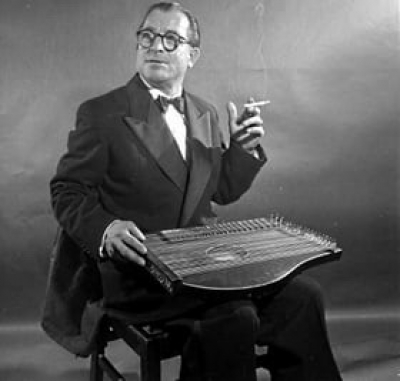 Anton Karas (7.07.1906 – 10.01.1985) was an Austrian zither player and composer, best known for his internationally famous 1948 soundtrack to Carol Reed's The Third Man, which came about as a result of a chance meeting.

Born in Vienna, one of five children of a factory worker, Anton Karas was already keen on music as a child. He wanted to become a bandleader, which because of the family's financial situation was impossible. However, he was allowed to learn to play an instrument, as were his two brothers and two sisters. He later reported that his first zither was one he found in his grandmother's attic at the age of 12.

On the order of his father, he undertook an apprenticeship as a tool and die maker at the age of 14, while also taking evening courses in music at a private institution. He successfully finished his apprenticeship in 1924 and worked in a car-factory until becoming unemployed in January 1925. Having already begun to study at the University of Music and Performing Arts, Vienna in 1924, he subsequently earned his living as an entertainer in a Heuriger (a wine bar, typically with a garden, usually selling the year's new wine) and soon found himself earning more income than his father. He continued his studies until 1928.

In 1930, he married, with the birth of his daughter following three months later. From 1939 to 1945 he was with German Wehrmacht anti-aircraft warfare, temporarily in Russia, where he also took a zither along. He lost more than one instrument from war action but always managed somehow to find another one.

In the summer of 1948, director Carol Reed was preparing to shoot The Third Man in Vienna and was staying in the Hotel Sacher, along with many of the British element of the Allied Control Commission for Austria. Robert Baty, the young son of the Director of Education, C.W. Baty, was given the task of showing the director around the city. On the second day, they stopped at a Heuriger, a wine tavern where growers offer their own wines for sale directly and heard Karas playing the zither in the background. This is described in Karas' L.A. Times and Reuters obituary which states that:

Reed, desperately searching for a theme tune ... chanced on the tavern in Vienna's Grinzing wine-growing district. Struck by the simple zither melodies, Reed asked a stunned Karas if he would compose the music for the film. Karas protested, saying he had never actually written music. As Karas later told the story, the director insisted and invited Karas to England. The Austrian became homesick and asked to be allowed to return. Reed told him he could—as soon as he had written the music. Under this pressure, Karas wrote his Harry Lime theme.

The film—with the music a contributing factor—was a gigantic success, and Karas' life was changed drastically.

On this week's show we have the theme music to the film. It has been arranged for brass bands by Mike Sutherland. This is the pen name of Klaus Butterstein. The performance features Foden's Band conducted by Garry Cutt in 2004.