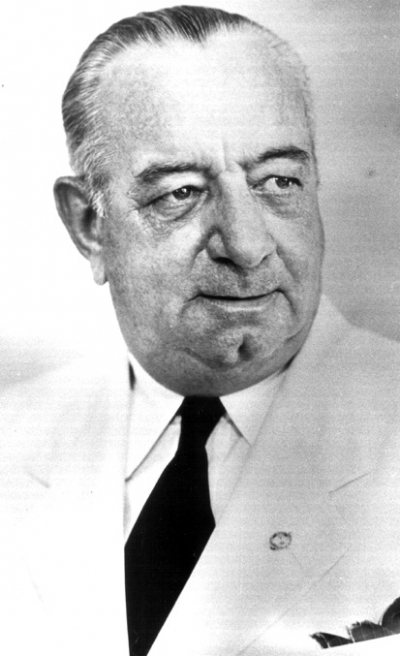 Henry Fillmore (1881-1956) was born in Cincinnati, Ohio, the eldest of five children. In his youth, he mastered piano, guitar, violin, flute, and slide trombone. He kept his trombone activities a secret at first, his religious father a composer of gospel songs, believed it an uncouth and sinful instrument.

Henry's mother secretly bought a used trombone for him and obscured, from Henry's father, the son's learning to play the instrument. He began composing at 18, with his first published march Hingham. He loved circus music, American football, and his music-loving dog.

The trombone fascinated him the most because it always led the circus’ bands, but his formal trombone lessons were short-lived, and his unruly teenage humour continued to embarrass his family. Henry’s father agreed to send him to the Miami Military Institute to complete his education.

After graduating from the Institute in 1902 he was given a position in his father’s church hymnal company but was not happy unless he was playing his trombone.

To escape family tensions Henry and his wife joined Lemon Brothers Circus where Henry was responsible for playing the trombone and leading the circus band.

As Henry’s reputation as a bandleader, trombonist, and composer continued to grow over the next thirty years, his love of the music, colourful spectacles, and ringmaster attention of the circus were continually reflected in his new compositions and performances as director of the Shrine Temple Band between 1921 and 1926, and later with his own Fillmore Band for Cincinnati’s Radio Station’s coast-to-coast broadcasts between 1927 and 1930 which featured his musical four-legged friend, Mike, the radio hound. He died in Miami Florida in December 1956.

While best known for march music and screamers, he also wrote waltzes, foxtrots, hymns, novelty numbers, and overtures. One of his best-known marches which he composed in 1916 closes the show for this week.