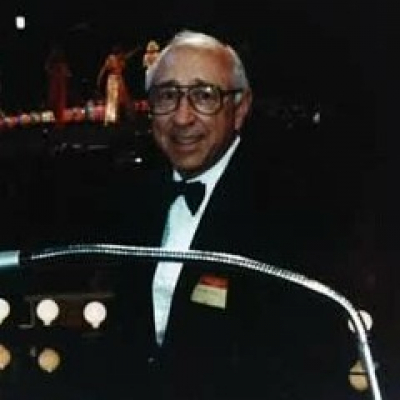 Abraham "Glenn" Osser (August 28, 1914 – April 29, 2014) was an American musician, musical arranger, orchestra leader, and song writer. His birthname was Abraham (Abe), but much of his work was under the name Glenn; he can be found with references under both names. He also worked under a number of other names Arthur Meisel, Bob Marvel, Maurice Pierre, and others.

He was born in Michigan in the US, the child of Russian-Jewish immigrants. He studied piano, violin, saxophone, and clarinet in high school and went on to study music at the  University of Michigan, beginning in music education and switching to music theory. After graduating in 1935 he worked with a college dance band and, on advice from the band leader, moved to New York City, where he met music publisher Charles Warren, who became his mentor.

He soon started arranging and some radio work, hired by  NBC to be a staff arranger. He also played sax and clarinet in some orchestras. He also got to work with Benny Goodman on his radio program, and wrote the arrangement of Martha Tilton's recording of " And the Angels Sing" with the Goodman orchestra. He wrote the melody to Ruth Lowe's number one hit, "I'll Never Smile Again", recorded by Tommy Dorsey and his Orchestra with the Piped Pipers and Frank Sinatra.

During World War II he served in the U.S. Maritime Service, After his discharge in 1944 he began to arrange for the Paul Whiteman orchestra. It was Whiteman who, disliking the name "Abe Osser," suggested the name "Glenn." He rehearsed and conducted Whiteman's orchestra on the NBC Blue Network, which became the ABC Network, and when Whiteman went on ABC television, Osser joined him.

Whiteman became music director at ABC and put Osser on as staff, where he served from 1947 to 1969, when staff orchestras were eliminated. During his time at ABC, In 1962, the New York Mets entered the National League and were greeted on the field by a recording of "Meet the Mets", arranged and recorded by the Glenn Osser Orchestra. The song is still played at Mets games and on broadcasts to this day.

Osser was the long-time musical director and conductor for the Miss America Pageant. He co-wrote the opening numbers and incidental music with his wife Edna providing lyrics

On this week’s show we are featuring his Cha Cha for Band played by Desford Colliery Band in 1973. Here is the name of another composer who you may have seen at the top right of your music and wondered who he was. Well, these few notes will give you an insight to a composer and musician who was at the top of his career.