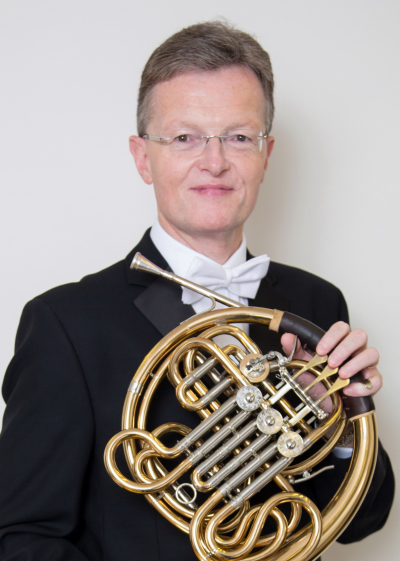 Chris Wormald is an arranger, composer, conductor, horn player, pianist, and adjudicator from Lancashire in England. He has played the French Horn professionally for over 30 years in many UK orchestras, the highlight being with the Philharmonia at The Barbican in London, and he was a multiple award-winning comprehensive secondary school music as a teacher for 34 years in England, becoming 2001 Classic FM Music Teacher of The Year at a major ceremony in London.

Chris has over one hundred published brass and wind band arrangements worldwide, many of them recorded by Black Dyke, Cory and Brighouse & Rastrick brass bands and many more brass and wind bands around the world. He also has over one hundred national and international adjudications to his credit, ranging from the Muse Wind Band Festival in Singapore to multiple Swiss, French, and English National Brass Band Championships.

As a teenage Tenor Horn player, Chris was a member of the National Youth Brass Band of Great Britain together with Nicholas Childs, Steven Mead, and many leading figures in the brass band world today and played with the NYBBGB under Harry Mortimer at Belle Vue in 1978.

Following his studies at university in 1983, Chris has conducted brass and wind bands professionally, he has also performed, toured, adjudicated and worked all over the world. Highlights include conducting in North Carolina, USA, Brighouse & Rastrick Band at Leek Arts Festival, Grimethorpe in concerts from Reading Town Hall to South Wales and being Musical Director of Wingates Band following on from Howard Snell. He guest conducted Black Dyke Band in both 2018 and 2019 performing his own arrangements.

Chris joined James Shepherd Versatile Brass as a French Horn soloist for five years in 1990, the year he was also appointed to Smithills School in Bolton as Director of Music. Chris quickly formed his internationally renowned Smithills Senior Brass, Symphonic Wind and Big bands and over the next twenty years of competition together they won over sixty, major national and international competitions including becoming inaugural World Brass Band Champions in Kerkrade, Holland in 2005 (WMC Adult, 3rd Section) and winning sixteen National Festival of Music For Youth titles at the Royal Festival Hall in London and Symphony Hall in Birmingham with his Symphonic Wind Band and Senior Brass Band.

Chris conducted his Smithills musicians all over the World on over twenty sell-out concert tours abroad, from Norway to New Zealand and Japan to five concert tours of America in addition to eight times at the Royal Albert Hall in London before he retired from teaching in 2015 to work full time as a freelance conductor, horn player, pianist, arranger, and adjudicator. He is thrilled and honoured to have his arrangements published by Obrasso.

We are featuring two of Christopher's arrangements on this week's show..