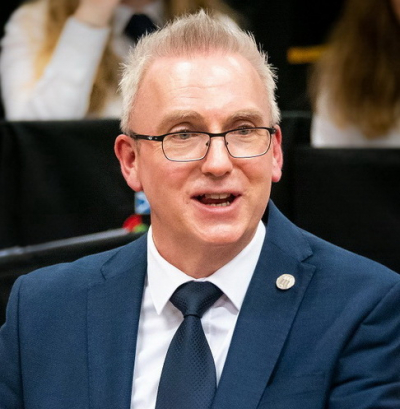 Ian Porthouse was born in Cumbria in 1967 into a family of musicians: his father was a cornetist and mother a pianist/singer.

At the age of five he began to take an interest in his dad's trumpet and joined Flimby Saxhorn Silver Band on 3rd Cornet where his father was principal cornet; within five years he would take over the end chair himself.

Also, around this time Ian became a founder member of the Cumbria Youth Brass Band under Richard Evans, who was to have a big impact on his career.

At the age of 16, Ian became the leader of the National Youth Brass Band of Great Britain and led the band for three years in total.

Richard Evans invited Ian to join the Leyland Vehicles Band in 1984 and within six months he was the new principal cornet at the age of 17.

In 1987 he went on to play with Desford Colliery Band under James Watson; the band became National Champions three years in succession.

In 1992, Ian was appointed Principal Cornet with the Black Dyke Mills Band, a position held by only five people in the previous 40 years, leading them to victory at the National Championships in the Royal Albert Hall in 1994.

During this time he played in such illustrious venues as the Carnegie Hall in New York and featured as a soloist with Phillip Smith, Principal Trumpet with the New York Philharmonic Orchestra.

In January 1995, Ian joined the Tredegar Town Band as Principal Cornet and resident conductor. He also conducted the Tredegar Youth Band and took them from National youth section to National 3rd section in two years.

1997 saw Ian accept an invitation to become Principal Cornet with the Yorkshire Building Society Brass Band under Musical Director David King. In that year, the band retained its European Champions title and became British Open Champion for the first time in its history, with Ian gaining the award for most outstanding soloist.

In 1999 Ian became musical director of Pennine Brass, taking them from the 2nd Section to the Championship Section in two years, including consecutive appearances at the National Brass Band Championships in 2000 and 2001, and numerous other contest victories, including the French Open title in 2001.

Ian gained another two National Championship wins with the Williams Fairey Band in 2002 and 2003 under Alan Withington.

Ian took up the baton with Tredegar Town Band in 2008 and has led the band to the National Finals every year since. Ian is also the only conductor ever to lead a band to victory at the Grand Shield and British Open in the same year with Tredegar’s memorable double in 2010.

Ian is currently Director of Brass Band Studies at the Birmingham Conservatoire and is in high demand as a professional conductor, tutor and adjudicator.