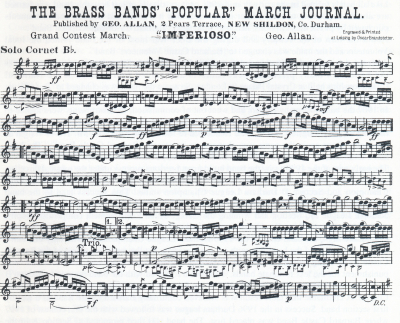 The featured image this week is a facsimile of George Allan's contest march 'Imperioso'. Whilst not one of his most favoured marches it would certainly test many bands at any of the annual Whit-Friday contest marches.

George Allan: The March King of the North of England

The featured image this week is a facsimile of George Allan's contest march Imperioso. Whilst not one of his most favoured marches it would certainly test many bands at any of the annual Whit-Friday contest marches.

George Allan was born on March 21, 1864, and died on March 16, 1930, was a composer and arranger of music for brass bands who was born, and resided for most of his life, in New Shildon, County Durham, United Kingdom. As a composer he was a contemporary of William Rimmer and J. Ord Hume.

His parents John James Allan, a Tailor and Draper, and his wife Hannah, lived in Chapel Street, New Shildon, when their new son was born. As a youth he was a choirboy at All Saints Church in Shildon having learned to sing as a child through the Tonic Sol-fa method. His choirmaster suggested that he find out what he could learn by joining a brass band, resulting in his joining the New Shildon Juvenile Brass Band under the tutelage of Edward Dinsdale (Uncle to New Shildon's other notable composer / arranger Thomas Edward Bulch 1862–1930) and someone known to our listeners in Australia, particularly in New South Wales.

He initially learned to play baritone, before gradually progressing to become a solo tenor horn player. He was eventually promoted from the juvenile band into the senior New Shildon Saxhorn Band, under bandmaster Francis Dinsdale (Grandfather of Thomas Bulch).

When Francis Dinsdale relinquished the post of bandmaster of the New Shildon Saxhorn Band prior to his death in December 1884, George Allan inherited the role. This opportunity arose in part through Thomas Bulch having already become bandmaster of a breakaway New Shildon Temperance Brass Band a few years earlier.

On reaching working age he initially worked as a labourer, before taking up a post as a Blacksmith's Striker at the North-eastern Railway wagon works at Shildon, where for a short while he worked alongside Thomas Bulch before he emigrated to Australia in 1884. He was also a subscribing member of the local Mechanic's Institute which had been founded in the town by the railway pioneer Timothy Hackworth.

Between the mid-1880s and his death in 1930, George Allan composed and/or arranged a considerable repertoire of pieces of music for brass bands, with some being also published as military band arrangements that included additional reed instruments. Many of these were published initially by T. A. Haigh's 'Amateur Brass Band and Military Journal' based in Hull. Later compositions were published by Fred Richardson's 'The Cornet Brass and Military Band Journal'. This latter journal, and rights to all the pieces featured therein, were later acquired by music publishers Wright and Round who continue to publish a selection of George Allan compositions as part of their archive catalogue.

He also self-published compositions, particularly in later life from his home at 2 Pears Terrace, New Shildon up until the end of 1924 and then from 4 Osbourne Terrace, Leeholme from 1925 onwards; these addresses being generally always printed under the title of the piece on each sheet.

From 1896, until the year of his death, George Allan also offered his services, and was engaged, as an adjudicator for brass band contests around the North-East of England, and Southern Scotland. In July 1902, he changed occupation to that of Wagon Painter, which he maintained until his retirement in February 1925 after which he moved from Shildon to nearby Leeholme.

He was married to Elizabeth Willoughby on August 16, 1887, at St Anne's Church, Bishop Auckland. The couple had three children: Beatrice, William Willoughby, and Lillie. Elizabeth passed away in August 1911 leaving George a widower. He did not remarry.

Between 1917 and 1929, he was the conductor of the orchestra for the New Shildon All Saints Amateur Operatic Society.

He died March 16, 1930, and was interred alongside his wife in the churchyard at All Saints Church in Shildon. A commemorative stone was unveiled opposite Shildon's town square during the 1970s.

During his lifetime, George Allan wrote at least 70 marches, as well as some concert pieces and pieces of dance music. He is best known today for his contest marches (pieces designed to show every section of a brass band at its best) a number of which continue to be played. These include Knight Templar, Senator and The Wizard.

On this week's show we are featuring bands and soloists from around the brass banding world. If you have a request or a question about the world of brass bands you can contact me at This email address is being protected from spambots. You need JavaScript enabled to view it. I will be pleased to play it for you and share it with our worldwide audience.