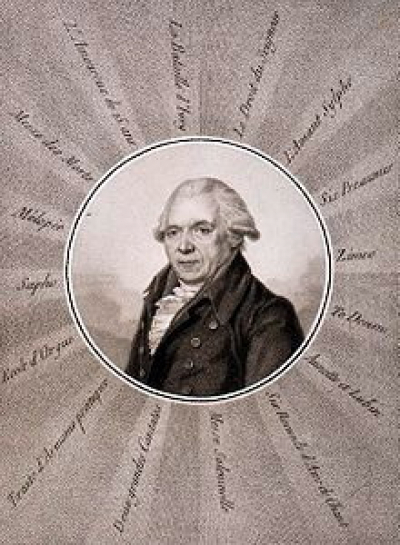 Jean-Paul-Égide Martini, also known as Jean-Paul-Gilles Martini (31 August 1741 – 14 February 1816) was a French composer of German birth during the classical period. He is best known today for the vocal romance "Plaisir d'amour," on which the 1961 Elvis Presley pop standard "Can't Help Falling in Love" is based. He was often confused with the Italian composer Giovanni Battista Martini, so is sometimes known as Martini Il Tedesco ("Martini The German").

Martini was born in  Bavaria as son of the schoolmaster Andreas Martin and his wife Barbara. He was educated at a Jesuit seminary and later started a study of philosophy in Frieberg, which he left without completing the course. He temporarily adopted the code name "Schwarzendorf", which is said to have been a means of trying to cover his tracks for the fear of being urged to refund his education costs.

He re-adopted his original family name in the Italianised form "Martini" after moving to France. There, he established a successful career as a court musician. In 1764, he married Marguerite Camelot. Having directed concerts for queen Marie Antoinette, he adapted to the changing regimes throughout the French Revolution, and later wrote music for Napoleon's marriage as well as for the restored Chapelle royale.

His highly popular church music combined old forms with modern theatricality, and his chansons including "Plaisir d'amour" were influential. In 1788, he paid 16.000 livres (an old French monetary unit) to become surintendant de la musique du roi. He was designated to take office after his predecessor's death, however the outbreak of the French Revolution prevented this. Martini lost all his functions and took flight to Lyon.

In 1800 he became a professor of composition at the Paris Conservatoire. In 1814, after the Bourbon Restoration, Martini was finally appointed surintendant de la musique du roi, the post that he had been promised more than 25 years earlier. His last composition was a requiem in honour of Louis XVI of France, which he performed in the Basilica of St Denis on 21 January 1816, the anniversary day of the monarch's execution. He died in Paris in February 1816 at the age of 74.

We are featuring Plaisir d'Amore as a cornet solo arranged by Peter Graham and played by Philip McCann accompanied by Sellers Engineering Band conducted by Roy Newsome.


Warning: count(): Parameter must be an array or an object that implements Countable in /home/sites/chrishelme-brighouse.org.uk/public_html/templates/jsn_ferado_pro/html/com_k2/templates/default/item.php on line 180